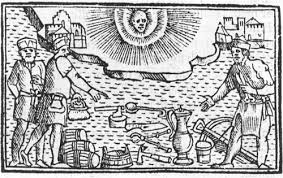 This differentiation was most definitely known in pre-Christian times. Events like Disting which featured a blot to the Disir:

In Svithjod it was the old custom, as long as heathenism prevailed, that the chief sacrifice took place in Goe month at Upsala. Then sacrifice was offered for peace, and victory to the king; and thither came people from all parts of Svithjod. (Saga of Olaf Haraldson, part II)

The well-known national sacrifices at Uppsala fall into this category as well, as do the “big three” sacrifices that Snorri mentions in Ynglingatal, as we see in other sources that these were communal holidays at Winternights, Yule, and Summer-meal:

On winter day there should be blood-sacrifice for a good year, and in the middle of winter for a good crop; and the third sacrifice should be on summer day, for victory in battle. (Ynglingasaga 8)

It makes sense that communal holidays would be celebrated for things like the harvest (Haustblot, or Autumn sacrifice), because the bounty of the harvest can be transported to a central site for the celebration. Contrast that to a celebration of planting, however; it’s not possible for each farmer to bring the fields together so they can be blessed! And that’s where the differentiation between communal and local ritual comes in.

Where some rites lend themselves to communality, others lend themselves to locality. Rites relating to the planting of crops, for instance, such as those mentioned by Bede in relation to the plow blessing, the crop-blessing charms that have survived to us, There is also the Alfablot, which we are explicitly told was celebrated by individual households, and outsiders were not welcome:

At dark to Hof we drifted.
The door was barred; so before it
I stood, knocking, and steadfast
stuck in my nose, pluckily.
Gruffly answer they gave us:
“Get you gone!” and threatened
us all: ‘t was heathen-holy.
To hell with all those fellows!

The following evening he came to another farm. There the woman of the house stood in the door and forbade them to come in, saying they had the sacrifice to the elves inside. (Austrfararvísur, Hollander tr.) 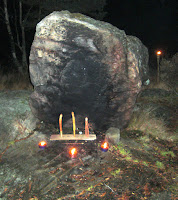 The fact that two farms within walking distance were each performing the rite separately would seem an excellent indication that there were indeed some rites, such as the Alfablot, which were practiced individually, if at the same time. We also see this in some of the many traditions around Yule, such as giving the house-wight his fee, or offering the feast to the Mothers.

In modern Asatru, I think this has great implications. Many Asatru groups will gather communally to celebrate holiday that were originally celebrated on a household level. Part of the problem is the lack of awareness of the fact that it’s perfectly okay, indeed preferable, that some aspects of worship be done privately, between one’s immediate family and the gods or elves. Similarly with agricultural celebrations designed to increase or guarantee the fertility of the fields (such as the charming of the plow many recently celebrated), there’s nothing wrong with a family doing so on their own garden (or farm if they’re lucky enough to have something larger than a mere garden), rather than everyone getting together to do so “symbolically” for everyone, or for the land in general. There’s a time for doing so, as Snorri tells us, and that’s at Yule, communally.

One way groups can still incorporate these local rites and rituals into their communal religious experience is to agree on a day when everyone in the tribe or kindred will perform them, and perhaps come up with a ritual script (or at least ritual outline) that they all share. Communicating that information out well in advance, to let everyone coordinate and plan for the day, would be very helpful on a practical level.

I see a place for getting together for ritual, and a place for performing ritual apart (even if it is done on the same day, recognizing the sacrality of the timing communally). Too many Asatruar get caught up in the “we should be doing everything together” mindset that it’s easy to forget that there was a place for both prior to the coming of Christianity.