The first Christian feast day associated with the Christmas/Yule season falls on December 6 (N.S.)*. This is well-known to many people nowadays, as it is the date of many krampus festivals in southern Germany and Austria. Nicholas himself was noted for secret gift-giving, and the tradition of leaving stockings by the fireplace stems ultimately from the story of St. Nicholas and the dowry for the three virgins.

However, it is those practices associated with the veneration of St. Nicholas that are unique to northern Europe, and those Germanic additions to the Nicholas myth, which are of interest to me as an Asatruar. Since he was originally from Asia Minor (modern-day Turkey), and his worship is fairly widespread, it is easy enough to distinguish those elements that were grafted onto the Saint’s veneration due to his feast day being on or close to the traditional date for these practices to be held.

In England, it was an occasion for teenage boys to put on the robes, miter, and cozier of the bishop and perform a sort of “lords of misrule” type game. This tradition was first abolished by Henry VIII, but to be honest seems more like a transference from the Roman celebration of Saturnalia, which happened later on in the month, than a true Germanic custom, since it’s not really recorded anywhere else.

In France (specifically the northeast and easternmost portions of the country), there are two traditions that point to some relationship with krampus. First, there is a story of Nicholas saving three children from a wicked butcher; iconography shows the butcher with a barrel full of children, recalling the krampus’ basket. Second, there is the character of Père Fouettard, who accompanies Nicholas on his rounds (this is acted out in the villages of the region) and chases or threatens naughty children with a switch, again reminiscent of the south German krampus.

In Holland, Belgium, and Luxembourg, we have Sinterklaas (whence we get the name Santa Claus), who shows up with his servant Zwarte Piet (“Black Pete”, whose black face and red mouth evoke the traditional krampus figure of the southern Germanic areas) and once again hands out gifts to good children and switches for naughty kids. And early songs about Sinterklaas talk about naughty children being put into his bag and taken away. Again, shades of krampus…

The wonderful Sinterklaas scene from the original Miracle on 34th Street

In the Alpine regions (Bavaria, Austria, Tyrolia, and eastern Switzerland) we have the now-famous krampus tradition. Krampus is way more involved than can be covered in this post, but the highlights include the fact that krampus (or differently-named creatures with similar attributes) accompany Nicholas as he visits the villages of the region (these visits are acted out by specialized troupes who dress in elaborate costume). While Nicholas makes a sermon and rewards good children, krampus is famed for threatening bad children with switches (see above re: France), or carries them away in baskets (ditto). The pagan antecedents of the krampus figure are uncertain; the quintessential attributes (long red tongue, horns, hair) can be traced back to the 16th century, but references to the Devil in St Nicholas plays (which were enacted on his feast day) go back to the 11th century, well within the time of the conversion era. 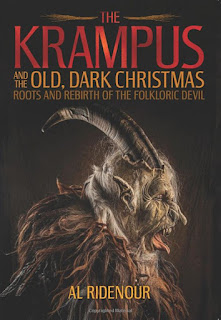 By the way, if you’re interested in a really first-rate book on the history of the krampus tradition and modern krampus plays and festivals, you can do no better than Al Ridenour’s recent book on the subject. Highly recommended. If you read that and don’t come away with ideas for your own Nicholas Day celebration, you don’t have an imagination.

Which brings me to the practicum. How to incorporate this material into modern Asatru practice? We’ve got gifts for children given by one figure, naughty children being whipped or abducted by another figure, and maybe a “lord of misrule” thing going as well

Let’s start with the date. While the modern date of St Nicholas Day is December 6, in the old Julian calendar, this would have been pushed forward a week or more. That could easily put it a week prior to the solstice. There’s some symmetry in having a celebration the week before the winter solstice, to harbor in the season. Perhaps not coincidentally, that is the start of the Icelandic month Mörsugur (“bone-marrow sucking”), which begins on December 14. That’s where I would plant this celebration.

But what to do? Oh, the possibilities! The ambitious could put on a proper Nicholas/krampus visit, with costumes and candy/presents for good children and switches for wicked children and so forth. The tradition isn’t one just done in the streets; the troupe usually enters private homes as well to go through their revels. As I mentioned elsewhere, it would be great to revive the “visiting tradition”, and arrange for such visits among Asatru families in a given area. Let’s see this all over the country!

Obviously, I would “re-Heathenize” the Nicholas figure, My suggestion here is Thor. Not only does the association with the color red fit (Nicholas is traditionally, if not exclusively, shown in red, befitting an Orthodox bishop, completely unrelated to the modern red and white association with Coca-Cola), but one of the stories associated with him also has him punching a heretic in the face. Even if it’s not completely connected, I think Thor would appreciate the irony.

But the clincher? Remember the meaning of the name of the Icelandic month that starts around this time; “bone-marrow sucking.” It just so happens that there is a myth associated with Thor that revolves around sucking the marrow out of a leg-bone, and it involves his goats:

Öku-Thor drove forth with his he-goats and chariot, and with him that Ás called Loki; they came at evening to a husbandman’s, and there received a night’s lodging. About evening, Thor took his he-goats and slaughtered them both; after that they were flayed and borne to the cauldron. When the cooking was done, then Thor and his companion sat down to supper. Thor invited to meat with him the husbandman and his wife, and their children: the husbandman’s son was called Thjálfi, and the daughter Röskva. Then Thor laid the goat-hides farther away from the fire, and said that the husbandman and his servants should cast the bones on the goat-hides. Thjálfi, the husbandman’s son, was holding a thigh-bone of the goat, and split it with his knife and broke it for the marrow.

Thor tarried there overnight; and in the interval before day he rose up and clothed himself, took the hammer Mjöllnir, swung it up, and hallowed the goat-hides; straightway the he-goats rose up, and then one of them was lame in a hind leg. Thor discovered this, and declared that the husbandman or his household could not have dealt wisely with the bones of the goat: be knew that the thighbone was broken. There is no need to make a long story of it; all may know how frightened the husbandman must have been when he saw how Thor let his brows sink down before his eyes; but when he looked at the eyes, then it seemed to him that he must fall down before their glances alone. Thor clenched his hands on the hammer-shaft so that the knuckles whitened; and the husbandman and all his household did what was to be expected: they cried out lustily, prayed for peace, offered in recompense all that they had. But when he saw their terror, then the fury departed from him, and he became appeased, and took of them in atonement their children, Thjálfi and Röskva, who then became his bond-servants; and they follow him ever since. (Gylfaginning 44, Arthur Gilchrist Brodeur  tr. 1916)

So here we have a tale with: 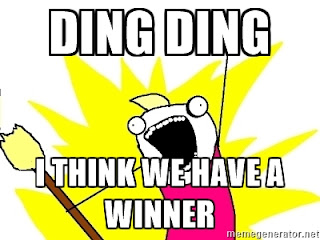 I won’t lie. I’m really proud of coming up with that association. I think there’s a real there, there.

In keeping with the medieval English tradition noted above, it might also be entertaining to choose a child or two from your tribe or kindred to be “goði/gyðja for a day,” given due respect and honors, if you’re making this a day of celebration in your own tribe. Given the myth with Thor and his goats, I might even “name” them Thjálfi or Röskva for the day…

So here’s kicking off the season, or the month of Mörsugur, once we adjust for the Julian calendar. December 14th, Thor, accompanied by his goat-like companions (perhaps we can fit in the Scandinavian julebok after all!) hands out small gifts to children while the goats chase and chastise the naughty children. If you can arrange the logistics, have Thor and his goats visit the various houses of the members of the tribe (they should receive suitable food and/or libations as they proceed on their circuit), or else have a central celebration.

And thus the Yuletide season begins.

HELPFUL PLANNING TIP: If you will be doing the full-blown visiting tradition, now’s the time to get the costumes done. In fact, it’ll be a bit of a rush, but you can still do it! Goat masks can be found here, and some sort of fleece coat turned inside-out can do for a costume, but by all means go crazy and make the costumes as elaborate and cool looking as possible!

_____
* N.S. = New Style, referring to the Gregorian calendar that we use today. O.S. refers to Old Style, i.e., the Julian calendar that was used prior to the 16th century. The shift in dates between the two calendars will be significant, as we will see, so it’s important to mark which calendar is being used.