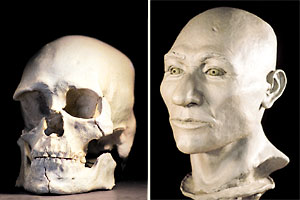 No, this is not a repost from 2005.
ScienceNordic has an update on the two-decade-old Kennewick Man case:

A 2004 court ruling decided that no one had ownership over the remains of Kennewick Man, but that his remains should be safeguarded by the U.S. Army Corps of Engineers, who owns the land where the remains were excavated. It also granted scientists the rights to study the remains.

Native Americans nonetheless took him to be an ancestor and called him the Ancient One. But initial investigations suggested Kennewick Man was not a Native American, and scientists believed he was more similar to an ancient group of people who went on to populate Polynesia. In fact, the Ainu people in Japan are thought to be the closest living relatives to this ancient group of people.

So was Kennewick man more closely related to the Ainu people or Native Americans? The debate continued for 19 years, until today.

Now an international team of scientists have sequenced Kennewick Man’s genome and found that Native Americans have the strongest ancestral claim.
The study is published this week in Nature.

The Asatru Folk Assembly also had a stake in the Kennewick Man case, claiming that the physiological features of the skeleton marked him as being related to ancient Europeans. That claim seems to be put to rest definitively, with the DNA sequencing results.