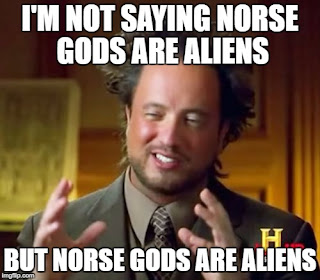 I don’t usually watch the (truly awful) History Channel show Ancient Aliens. But I happened to come across an episode titled “The Viking Gods” (originally aired in 2013), I figured it would be fun for a lark to record it and watch.

The whole episode is actually available online, here. I don’t recommend watching it, unless you have a high tolerance for bullshit. Which is par for the course for the whole series, I should point out.

The episode was, as expected, a journey into the absurd. Among the jewels this episode explored:

Oh, my head. You’re welcome in advance; I watched this bullshit so you don’t have to.
But what to my wondering eyes should appear as an expert Norse Mythologist? None other than Karl Seigfried, proprietor of the Norse Mythology Blog, Troth clergyman, and someone

Don’t believe me? Here’s a screen-cap from the episode itself (you can find it at the link above at the 38:11 mark). 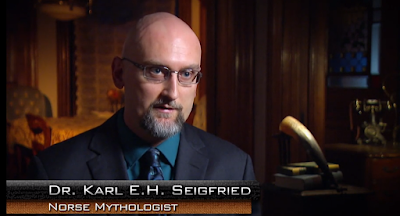 Oh, this is beautiful.
The Esteemed Doctor Karl E. H. Seigfried, self-appointed spokesman for the Universalist Norse Neopagan community, ordained clergyman of the Troth, is on television shilling for ancient alien bullshit.
He is lending his gravitas (at least, those who don’t know him will think he has gravitas) to make this absurd bullshit credible. He’s a talking head lending his Doctorate to give credence to this lowest-common-denominator sensationalist nonsense.
The best part? His Doctorate is in Double Bass Performance.
Yes, that’s right. The imposing Doctorate that he keeps swinging around to boost his own image is in music. Jazz, to be precise. Maybe Thor’s hammer was in fact an alto saxophone from Alpha Centauri?
I’m not saying Karl ”

He says he’s not

. But if he’s not, I have to wonder why he would choose to associate with this sewer of a show.

It seems quite obvious that he is more than willing to sell out to any peddler of crap who comes along with the promise of 45 seconds of air time on cable TV. The most dangerous place in the world is between this clown and a camera, or an opportunity to see his name in print.
Just remember the depths to which this nincompoop is willing to stoop the next time he tries to speak for your group. (heh)
What’s that? We’ve got something new from the good doctor that just came out? What a coincidence!

Edit: I found a blog post from “Boom Boom” explaining his motives going into the show, and linked to it above. But my point remains unchanged; he willingly let himself be used by these people to give a veneer of respectability to their sensationalist nonsense. That makes him a shill.