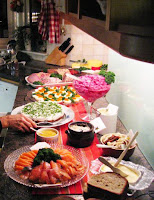 Of course Christmas itself has just passed (and I hope that those of you who celebrate it had a wonderful holiday, even if you only do so as a secular holiday of family, plenty, and generosity, with no religious overtones, like my family does), but the traditional date of Yule is still more than two weeks or so away, so we’re continuing to Make Yule Great Again here at the Garden.

This time, I would like to present a few traditional dishes for your Yule feast. Most are more modern Scandinavian dishes from the traditional julbord, or Christmas buffet.
Swedish meatballs. It’s not particularly a Yule dish, but come on. Can you really do a traditional Scandinavian buffet without them? Recipe here.

The Christmas ham. This is the centerpiece of the julbord; the ham, or julskinka, is first boiled, and then served cold, with a crust of mustard and breadcrumbs. Also note the continuing references to boars and pork (associated with the god Freyr) with the holiday. The Local (a Swedish news outlet) mentions that the pigs are killed on Lussinatta, at night. Recipe here.
Pickled herring. Pickled fish is a staple in Scandinavian countries as a rule, but it is especially brought out in the cold winter months, when fresh fish would be something of a rarity. Generally, this is something to be store bought, but the adventurous might try to make their own with the recipe here.
Lutefisk. Take air-dried whitefish, soak it in lye and salt for days, and then rinse it off and cook it once it becomes gelatinous. I’ve never dared try it (and I eat just about anything) but it’s a staple in Norway and Sweden in the traditional Julbord, eaten with boiled potatoes. Want to make it? There’s a recipe here. Good luck Paisan!
Yule bread. A traditional Viking recipe, flavored with cardamom and almonds. Recipe here.
Norwegian Christmas Bread. Another recipe, almost akin to an English pudding rather than a bread, with raisins and walnuts. Recipe here.
Dopp i grytan. Called “dip in the pot” in English, this is a custom of dipping bread into the reduced juices used to cook the ham, like a fondue. I’ve never done it, but it sounds amazingly good. Recipe here. 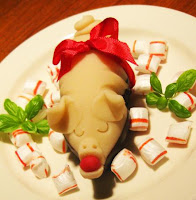 Janssons Frestelse. If you want to get more adventurous than the boiled potatoes mentioned above (and nothing says you can’t do both!), try this sort of scalloped potato dish, with anchovies (I happen to love anchovies, and the thought of the salty fish mixed in with the creamy potatoes and onions sounds great). Recipe here.
Marzipan Pig. Obviously a new addition to the menu, this dessert course made of shaped almond paste seems obviously tied back to the recurring themes of boars and Freyr and Yule. And isn’t the little apple in its mouth adorable? Marzipan recipe here.
Glad Yule to all!