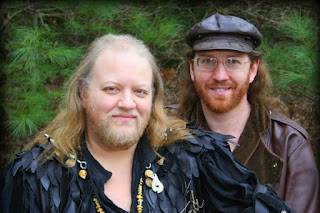 Apologies for the dearth of posts lately, but I’ve just started a new job, and our annual Halloween party is tomorrow, so time is precious. But I couldn’t resist point out a certain disparity that came to light tonight.

Last year, a group calling itself the “Alliance for Inclusive Heathenry,” which was basically a bunch of Troth leaders with a logo evidently designed in MS Paint, tried to raise funds to send some of their representatives to the Parliament of World Religions, so their chosen bigwigs could hobnob with other self-important luminaries and discuss the importance of climate change.

Now, I’m not saying this to dogpile on Raven. Far from it; I actually have no little amount of respect for him, as he doesn’t shy away from what he is or what he does, and doesn’t try to couch either in euphemisms or false declarations of inclusiveness like some do. I’ve got a lot of his books, and he definitely knows what he’s talking about, even if it’s not a path I choose to follow, for a variety of reasons.

I’m just pointing out the difference in enthusiasm between folks wanting to send some Troth bigwigs off to puff themselves up under some made-up group name, as opposed to supporting someone who wants to teach. I made the same point last year, in comparison with the AFA’s fundraising efforts, but it seemed worth pointing out that the AFA isn’t the only group who can paste the Troth in terms of fundraising. Even jotun-worshiping, trans, polyamorous tribal kings are beating you at the popular support game.

Seriously, Trothers. You’re embarrassing yourselves. First the AFA, and now the King of Asphodel is stomping you in terms of support. I’d recommend a deep, soul-searching self-inquiry as to why that might be, but I’m very sure you’re too certain that you’re right to ever even do so. It must be everyone else’s fault, right?