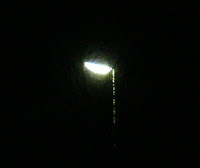 Something happened the other night that brought to mind a topic I’ve been wanting to blog about for quite some time now.

Saturday night, while the Trophy Wife was out celebrating Mabon with her friends (we’ve a mixed marriage, you see; she’s Pagan, and I’m Heathen), most of them happened to see a very peculiar light display in the sky. I didn’t see it, having been inside cooking way too much chicken cacciatore and generally getting things set up for the feast to follow their ritual. But I was told about the event and my first instinct was to turn to Google to see if anyone else had seen it, and if so, was there any mundane explanation.

Turns out that the same thing was seen up and down the East Coast, and was caused by a NASA experiment involving clouds in the upper atmosphere. I have no doubt that it was an impressive sight, though, and especially coming after a ritual experience I can see how one could ascribe to it more significance than it might otherwise warrant. The tinfoil-hat brigade are out in force, with claims of NASA cover-ups and sinister alien visitations. However, as it turns out, “it’s a streetlight.”

It does, however, bring up a point about the role of skepticism in heathenry (and paganism, for that matter) in general, and in those magical practices associated with it. It’s easy to say that our sacrifices bring the spring rains, or that our good fortune comes from a healthy relationship with the local land-wights. Even when it comes to the very existence of the Gods and other wights, we who live in the twenty-first century, full of miracles of technology and science, must balance faith against credulity.

Is every crow that croaks from right to left as we leave the house betokening a good outcome of our journey? Are there really Gods out there in some other world called Asgard? Do disembodied spirits really dwell in stones and rivers, and can they somehow influence our lives in ways both subtle and gross? Does the fehu rune somehow function as a key to prosperity and change? Just how literal, and how symbolic, should we take our lore and our beliefs and practices?

Naturally, this is not a question limited to Paganism. Christianity has been struggling with such things for centuries, as have just about every religion out there (the FSM being a notable exception). However, being a Heathen myself, and one possessed of what I like to think is an analytical mind, I find myself thinking about such things.

What are we doing with our rituals? Are we really making offerings to unseen entities in order to garner their favor, or are we performing actions to reinforce our group-psychological and social ties to others who do the same? Is magic really able to influence probability to make a desired outcome more likely, or is that just a psychological effect of clearly stating an intend and following it through?

More to the point; does it make any difference one way or the other?

Is religion… any religion… about connecting with a Divine force, or is it about connecting with our fellow believers? The ancient Romans and Greeks thought that orthopraxy (correct practices) was much more important than orthodoxy (correct dogma). We have a multitude of examples from history and literature of people who were perfectly comfortable mixing Heathenry and Christianity, or Heathenry and no literal belief at all. It seems to be a common thread among the Indo-European folk that the social aspects of shared belief are more important than any individual’s particular faith in the literal existence of Gods and spirits.

Partake in this thought-experiment with me.

Assume the Gods and spirits do exist. If we act as if they do exist, we gain their favor. If we act as if they do not, we lose nothing. Remember, most Pagan and Heathen religions don’t reserve punishment in the afterlife for lack of belief, but rather for bad behavior; murder, oath-breaking, etc. So in this conception, Pascal’s Wager has a bit of a side-bet.

Assume the Gods and spirits do not exist. If we act as if they do exist, we behave in a pretty socially acceptable manner. We don’t murder, we don’t break our promises. We may… may… gain a slight psychological benefit. We lose a few minutes a week, but we forge social bonds with that same time. I’d call that loosing nothing, at worst. If we act as if they do not exist, we lose nothing. And for Heathens and Pagans, there’s no eternal brimstone for choosing wrong. You just led a good life by acting as if they do exist. Pascal’s Wager really works out well for us.

So… what’s to lose by acting as if they do exist? That’s the chips we set down when taking Pascal’s Wager. A few minutes a day, on average, spent in ritual. Over the course of a human lifetime, that time might well have been spent in other pursuits. But there are benefits as well; we get social bonding, good behavior, and no damnation if we’re wrong!

So I say be skeptical. If there is proof against a thing, discard it. But if faith provides some benefit, even intangible, embrace it. You’ve got nothing to lose by doing so, and you might even gain something. Don’t murder anyone, and don’t break your sworn word. I think that’s two commandments just about everybody can agree with.

5 thoughts on “It’s a Streetlight”