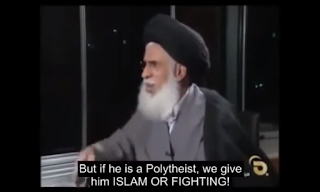 Islam is quite obviously in the news lately, and discussions of whether or not Islam is compatible with Western values are commonplace. But what often gets lost in the shuffle is the fact that Islam treats “people of the book” (Jews and Christians) very differently from we Heathens. The people of the Book have three choices; convert to Islam, pay the jizya (a tax intended to emphasize the submission and humiliation of conquered people), or die.

Asatru is a polytheistic religion, however; we have many gods, such as Odin, Thor, Freyja, and so forth. And Islam has a shorter menu for us; convert or die. Don’t believe me? Check out the following video (the money quote is around the 1:35 mark):

If he is of the Book (Christian or Jew) we give him three choices. One, you become Muslim. If he accepts, we don’t take jizya from him. If he remains a Christian, and that’s his right, we tell him, “Give me jizya”. If he refuses jizya, we FIGHT him! But if he is a polytheist, we give him ISLAM OR FIGHTING! That’s not just my opinion, it’s the opinion of all five Islamic sects.

So yeah, the rise of Islam and the threat of jihad has a bit more urgency for me, as an Asatruar, as a polytheist, than it does to my Christian and Jewish friends and neighbors. At least you get the choice to pay a humiliating tax and still practice your religion. To a Muslim, I don’t even rate that consideration. And since I won’t ever convert…

One thought on “Islam to Asatru: Convert or Die”