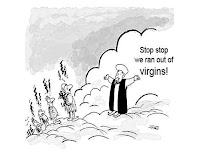 Today a mob in Cairo violated international law and stormed over the wall surrounding the U.S. embassy to Egypt, in a scene eerily reminiscent of what happened in Iran after the Islamist revolution there. The American flag was torn down and in its place a black flag with jihadist slogans was raised in its place. This was, apparently, due to Egyptian television inciting the riot by playing clips from some video that they knew would incite the barbarians among their viewership that showed Mohammed in a bad light. Apparently, it’s not even an American video, but a Dutch one. Mobs are not known for their subtle interpretation of facts, however.

Now, how did the U.S. Embassy react to their staff being forced to retreat from the embassy grounds and the American flag being desecrated? Why, they condemned the video that was used to incite the mob, of course:

The Embassy of the United States in Cairo condemns the continuing efforts by misguided individuals to hurt the religious feelings of Muslims – as we condemn efforts to offend believers of all religions. Today, the 11th anniversary of the September 11, 2001 terrorist attacks on the United States, Americans are honoring our patriots and those who serve our nation as the fitting response to the enemies of democracy. Respect for religious beliefs is a cornerstone of American democracy. We firmly reject the actions by those who abuse the universal right of free speech to hurt the religious beliefs of others 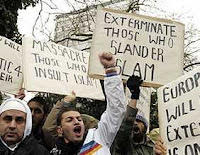 How many times do we need to be shown that Muslims are emotionally stunted as a group, that they demand special treatment for themselves that they don’t even make a pretense of showing towards other faiths (or lack thereof), and that they have such a non-concept of the true meaning of the freedom of speech, freedom of conscience, and freedom of religion that their first go-to strategy when they feel offense is to kill people, burn down buildings, and destroy property.

Worst of all is the reaction of the American government, through its Egyptian Embassy, which doesn’t condemn the violence against the embassy itself, but tries to make the case that the Freedom of Speech enshrined in the First Amendment to our Constitution somehow doesn’t apply if that speech offends someone else’s religious sensibilities!!!

So, when Pat Robertson said that witchcraft is inextricably linked to abortion, divorce, feminism, should we have expected Wiccans around the world to lose all control and start stabbing people and burning down churches?

When the Pagan religious space at the United States Air Force Academy was vandalized within days of its being opened, should we have expected all Air Force installations around the globe to go on lockdown, against the inevitable and expected backlash from hordes of outraged Pagans determined to kill as many Airmen as they could before they entered the Summerlands?

Every time that a Muslim says “There is no god but Allah and Mohammed is his prophet”, every Christian within earshot should be expected to grab any handy bludgeon and beat the offender to a pulp, perhaps also slicing off their head in outrage that the divinity of Jesus is being questioned?

That every time a Jew hears someone say the word “god”, they should immediately be expected to go into a killing frenzy, because the offender has violated what they think their god has commanded?

When my car has a bumper sticker that says “My God Wields a Giant Hammer. Your God Was Nailed to a Cross. Any Questions?” I should expect that it will be vandalized and set on fire (preferably with myself inside) because reasonable Christians just can’t be expected to respond any other way? 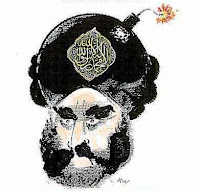 No! Of course not! There’s only one religion that everyone tip-toes around because its followers are so irrational, so barbaric, and so self-righteously demanding that they expect everyone to not only respect their beliefs, but also to refrain from disagreeing with them, lest they be the subject of violence.

No more special treatment for Islam. No more tip-toeing around it. It’s a monstrous, barbaric religion must be stopped before it’s able to impose a silence of fear across the planet.

The First Amendment affords me the right to worship, and the right to speak. It does not afford anyone the right not to be offended by my speech, nor does it carry with it any implication that I should temper my speech or my beliefs accordingly.

And you know what? The fact that they’re offended does not mean I’m going to stop, and it most certainly doesn’t mean that the U.S. government should in any way tell me that I should stop doing, or saying, anything just because Muslims will be offended. You can’t handle ridicule? Can’t handle cartoons, or videos, or speech that “offends” you? Shut up. Everyone else can.

Muslims don’t get a special pass. They get to be offended like anyone else. And if they just can’t handle that fact, that somewhere, someone is behaving or speaking in a way that doesn’t show their weird barbaric beliefs respect, they don’t get to act out like children, killing, maiming, burning, and destroying. If they try, they should be put down.