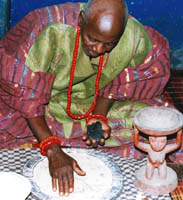 In the first part of this series, I discussed the Japanese religion of Shinto. A lot of contemporary neopagans like to bring Shinto under the “Pagan umbrella,” but the followers of Shinto certainly don’t consider themselves to be Pagans. Shinto is is rooted in ancient Japanese culture, and converts (especially non-Japanese converts) are rare.

Today I’d like to discuss another religion, or rather a constellation of religions, called Yorùbá. The name comes from the Yorùbá people of west Africa, who had a very successful empire between the 16th and 18th centuries, and whose cultural and tribal stamp remains strong today. It’s strongly related to both Voodoo (Voudou, Vodou, etc.) and Santeria and its cousins, through what is known as the New World African Diaspora (particularly due to the importation of black slaves into the Caribbean and South America).

On the surface, Yorùbá seems like a perfect candidate to fall into the “Pagan umbrella.” It’s polytheistic, has a well-developed theology, mythology, features ancestor worship and an involved set of ritual, and even has a robust magical tradition, Ifá. 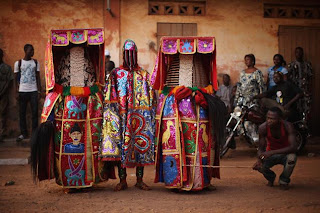 And yet… among the followers of the Yorùbá faith(s), the term “pagan” is associated with the worst histories of the campaigns of extermination and conversion by both Islam and Christianity. Whenever the term “pagan” is used in connection with Yorùbá, it is invariably in a derogatory manner.

It is also the case that Yorùbá is seen as an extension of the native west African tribal culture. Especially when it is self-consciously adopted by blacks here in the United States, it is linked specifically to those of African descent:

About two years ago, he found a home in one of Yoruba’s esoteric branches, called Ifa.

“What brought me to Ifa is that how close this tradition is linked to us as African-Americans in this country,” he says.

This feeling is familiar to many black Americans who practice Yoruba today, just as it did with those who have been practicing for years. In New York City in the 1950s, African-American Yoruba communities began to grow alongside a surging black nationalist movement.

Tracey Hucks, chairwoman of the religion department at Haverford College, says, “for so many African-Americans, this tradition has been a space of freedom and a space of home.”

She says blacks in America have been drawn to Yoruba for more than a half-century because it offers them an ancient spiritual heritage, one that predates slavery in the United States. At the same time, she adds, it helps them affirm their racial identities in this new world.

“And it also allows them to be able to affirm their black physicality, in a place that has said that, ‘You represent anti-beauty in this culture,’ ” she says. “It is this religion that comes and says, ‘No, you look like the gods of Africa.’ “

Doing rituals for those gods, dancing for them, and finding fellowship with her community, Profit says Ifa just feels right to her. (NPR, August 2013) 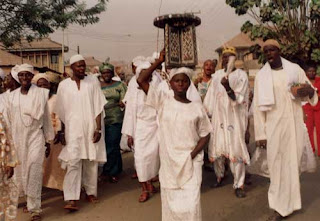 To be fair, there are organizations, like the Ifa Foundation International, that consciously try to push a more inclusive vision of the Yorùbá faith. However, their authenticity is questioned in some quarters, being seen as outsiders trying to “infiltrate, hijack and pervert” what should be an authentic ancestral African faith. Others maintain that one of the criteria for being a “devotee of Obatala” is to be a direct descendant of him, and that lineage is meant literally.

So, again, I ask the question. Should Yorùbá, which has a lot of similarities to modern neopaganism, count as “Pagan” even though they don’t want to be so counted? Is it to be held under the same umbrella as Wicca and Druidry, even though they eschew such associations? Should a faith that was born in Africa, and followed by Africans, be opened to “caucasoid interlopers“, or does it have the right to pass along its traditions, which stretch back far beyond the era of colonialism, to those who wish to recover the “light of the Elder Ancestors“?