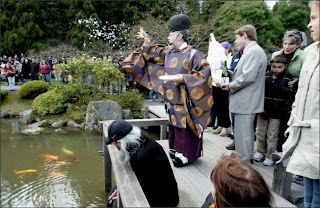 As many regular readers will know, the question of how we define “Paganism” is something that I find fascinating. On a practical level, the definition of contemporary Paganism (or Neopaganism) has implications in academia, the law, and how those under the “Pagan” umbrella are viewed by society at large.

One of the great failings of many attempts to come up with a definition of Paganism is that the definition is too broad. Like some vast spiritual fishing trawler, such definitions snatch up faiths and practices whose adherents would find the notion that they were being called Pagan not only inaccurate but insulting, as the word has definite negative connotations. While many within the contemporary “Pagan community” use the term deliberately as a way of reclaiming it, these other faith, ethnic, and cultural groups are not invested at all in such an enterprise, and resist such labels vehemently.

Take, for example, the Japanese religion of Shinto.

Shinto, the traditional faith of the Japanese people, certainly fulfills many of the criteria of the various definition of “Pagan” religions that have been advanced. It is both polytheistic and animistic, with both Gods and place-spirits abounding. It predates Christianity (stretching back to at least the 8th century CE). There are rituals and shrines. It grows and evolves, morphing in response to the needs of the Japanese who still follow it, many of whom practice a sort of mixture of Taoism, Buddhism, and Shinto, which most forms of Shinto fully allow and embrace. It forms a basis by which its adherents can relate not only to one another but to the world around them, with healing traditions, rituals of purification, and worship of spirits of place such as Mount Fuji.

Shinto is incredibly diverse, with hundreds of different sects. There is a regular calendar of festivals. There’s even a Koshinto (“Old Shinto”) movement that attempts to “reconstruct” pre-Buddhist Japanese religious beliefs and practices in much the same way that modern “Pagan Reconstructionists” attempt to reconstruct pre-Christian Pagan religious beliefs and practices. It’s like modern Paganism looking in a mirror at times.

But do Shintoists consider themselves Pagan? The answer is no.

The term “Pagan” was used as a derogatory term by Christian missionaries in Japan, as it was in most other places. Pagans were, in Japan as elsewhere, poor benighted fools who were in need of the Good News of the Gospel.

In fact, the Encyclopedia of Shinto actually refers to Christianity itself as “Pagan”, in the sense of “any religion that isn’t my own.”

It is very easy to find interest in Shinto from the (Neo)Pagan side. Contemporary Pagans and Heathens are very fond of using Shinto as an example of a successful, contemporary polytheistic faith in the modern world. But the love is one-sided. In researching this article, I was unable to find a single Shinto organization that embraces the term Pagan to describe themselves and their beliefs and practices. They are not interested in being brought under any sort of “Pagan” umbrella. They are Shinto, and prefer to be dealt with on those terms and using that label.

It is also a fact that the overwhelming majority of Shinto practitioners are themselves Japanese. While it is not impossible to find Shinto shrines outside of Japan (Hawaii, for example, has no fewer than seven such shrines), they are almost exclusively attended by people of Japanese descent. Indeed, only seven non-Japanese Shinto priests had been ordained as of 2011. It takes more than just self-initiating after reading a Llewellyn book.

So does Shinto, which has a lot of similarities to modern (Neo)Paganism, count as “Pagan” even though they don’t want to be so counted? Is it to be held under the same umbrella as Wicca and Druidry, even though they eschew such associations? Is a faith that is almost exclusively the province of Japanese people open to gate-crashing anime fans, or does it have the right to set its own bar so high that only the most serious of converts, a total of seven, are ordained in the tradition?

I submit that any definition of Paganism that is so broad as to include a faith that doesn’t want to be called Pagan, fails. More examples and analysis to come.