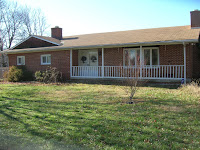 Joe Marek is godi of Gladsheim Kindred in Maryland, which also operates Gladsheim Hof in the town of Columbia, MD. Gladsheim is one of a few facilities in the United States dedicated to Asatru, and Joe was kind enough to do an interview with me concerning their hof, given the recent news out of Iceland and California regarding two other high-profile hof projects.

A:  It’s a single family home on a main state road that I knew I could have rezoned  for a conditional use as a religious facility. It was a brick rancher with a cathedral ceiling in the main room and another really large room in the basement and on a half acre lot. I saw this as being perfect for our needs. Spiritually it is a place to worship the Norse Gods and help the community with being a regular place to hold rituals. 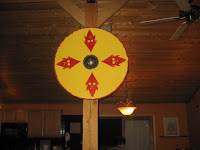 Q: What was the genesis of Gladsheim Hof? What made you want to make it a reality?

A: I have been Asatru my entire adult life. I realized early on that something other religions have in common is having a building to use for a place or worship. when I purchased a home in suburban Maryland I made sure there was space in the finished basement for rituals. But I wanted a separate building open to the public where this could happen knowing that it would help the community at large.

Q: Where did the financing come from for the Hof? 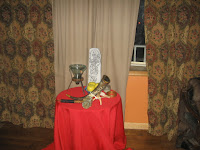 A:  My Mother passed away in 2003, I inherited the home I grew up in, I sold the house in 2005 and used the profit to purchase the Hof in Columbia. I used my own money to make this happen. The location was within a mile of I95 and easy to get to from several areas and centrally located in MD.

Q: Is Gladsheim Hof open to the public, and if so, what sort of rituals are held there? Do you have a regular schedule of events?

A: All the events at Gladsheim Hof are open to the public, we have the main Blot every second Saturday of the month. the forth Saturday is a movie/social night were we watch a movie or play games. We also hold rune classes and lore study on alternating Wednesdays, so there is something going on every week at the facility, our Website www.gladsheim.org has details. 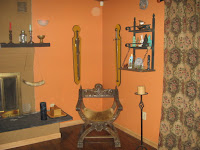 Q: Does having the Hof, which is presumably a permanently-hallowed sacred space, change the way you do rituals?

A: Not really. I conduct the ritual the same way as I would in any other space, but It has a different level of spirituality.

Q: What role does Gladsheim Hof plays in the larger Asatru community in your area?

A: We offer the  events I mentioned before and we also have special classes offered at various times on other Asatru related subjects such as siedr.

Q: Do other groups in your area (Asatru or not) also make use of the Hof, or is it strictly for Gladsheim Kindred?

A:We  rent the Mead Hall out to a couple of other groups for meetings and classes not rituals. 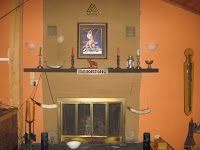 Q: What do you think having the Hof allows you to do that other groups might not be able to do in their private homes or public/rented spaces?

A: There was a time when Gladsheim rented a public space, it was very sterile and plain, no where as inviting or as vibrant as The Hof, it clearly did not have the same feeling.

Q: What’s the plan for the Hof? Anything happening in the future?

A:  The Faith is growing so we are always prepared to have more days of events to accommodate future growth, Plans for making some outdoor improvements like a deck built over our existing fire circle are in the works. 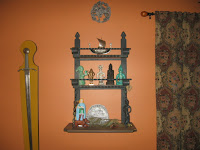 Q: What do you think of the plans for the hof in Iceland that has received so much attention lately?

A: I was over in Iceland in 2006 when they first received approval from the city council to have a larger facility than the one they currently have. It’s never easy to get a major project off the ground. I find it very exciting that there are other Hofs popping up in Michigan and California and other parts of the country to serve the Asatruar there.  Another reason for creating Gladsheim Hof was to encourage others to do the same, let them know it is possible and that dreams do come true.

Photos are courtesy Gladsheim Kindred, and are used with permission.