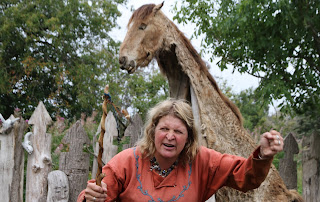 Something I’ve been wanting to do for many years is start incorporating the consumption of horse meat in my ritual feasts. The consumption of horse meat was a defining feature of Heathen religious practice for many years during the era of the conversion to Christianity, and the willingness to consume, or not consume, horse flesh was sometimes used as a test of one’s faith…

The next day, when the people sat down to table, the bondes pressed the king strongly to eat of horse-flesh; and as he would on no account do so, they wanted him to drink of the soup; and as he would not do this, they insisted he should at least taste the gravy; and on his refusal they were going to lay hands on him.  Earl Sigurd came and made peace among them, by asking the king to hold his mouth over the handle of the kettle, upon which the fat smoke of the boiled horse-flesh had settled itself; and the king first laid a linen cloth over the handle, and then gaped over it, and returned to the high-seat; but neither party was satisfied with this. (Saga of Haakon the Good (Samuel Laing tr.), ch. 18) 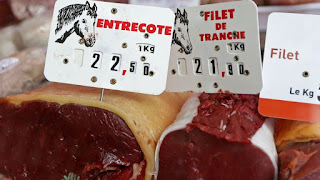 Now, horsemeat is a common enough ingredient in Europe and Canada, but is not found at all here in the U.S., mostly thanks to the animal rights lobby. It’s not illegal to butcher horses for human consumption, but it’s impossible for practical reasons, and although there’s no direct ban on importing horse meat, there is a practical one, as the U.S. Customs and Border Protection service will not allow travelers to bring meat of any kind into the country.

I’ve tried several different exotic food websites in the U.S., but although one can get iguana, alpaca, and camel, horse is off the menu for some reason. And stores in Canada and Europe won’t ship to the U.S., doubtless because of the aforementioned ban by U.S. customs.

However, I think that, given the fact that the the consumption of horse meat was a traditionally Heathen thing to do, and a blanket ban on all imported meat is hardly the least restrictive strategy for achieving the government’s goal (which they’ll doubtless say is public health), some sort of waiver for the importation of modest amounts of horse meat for religious purposes is not unreasonable.

So this is the email I sent to U.S. Customs and Border Protection:

Hello,
I am a practitioner of the Asatru religion, which is the reconstruction of the ancient faith of the Norse and Germanic peoples. An integral part of our religious faith centers around the consumption of horse meat during religious rituals, a practice that is well-attested in both the Icelandic Sagas and the Heimskringla (one of our historical religious texts).

I lead an Asatru congregation in New Jersey, and we are looking for options to import a small amount of horse meat from Canada for our personal religious use.

How do I go about requesting a religious exemption (under the authority of the First Amendment of the Constitution and the Religious Land Use and Institutionalized Persons Act)? I would like some sort of letter that I can show to customs officials in order to be able to bring in a small amount of horse meat from Canada, again only for my personal religious use.

I would appreciate any information and assistance you could provide.

I’ll report back when and if I get a reply (the website says to expect a wait of several weeks). This may end up in court!

UPDATE (11/5/2015): That was quick! I heard back from Customs, and they informed me that it’s all right to bring in “personal consumption” quantities of horse meat from Canada. They pointed me to the USDA Animal Product Manual, which states, in Appendix A, page 33:

Personal-use amounts of equine meat or meat products commercially packaged and labeled will be allowed in passenger baggage. No import permit or other documentation is required.

So there we are! Problem solved. Now all I need is a passport.