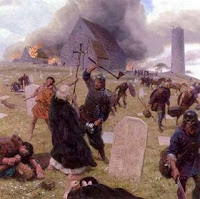 On this day in the Year of Their Lord 793, a group of enterprising Norsemen fell upon the isolated monestary of Saint Cuthbert on the Scottish island if Lindisfarne. While it was not, strictly speaking, the first such raid on the British Isles, it was devastating in its effect. Today, the raid on Lindisfarne marks the formal beginning of what we call the Viking Age.

Of the raid, the Christian chronicler Alcuin wrote:

Never before has such terror appeared in Britain as we have now suffered from a pagan race. . . . The heathens poured out the blood of saints around the altar, and trampled on the bodies of saints in the temple of God, like dung in the streets.

I’ll be drinking a toast in honor of those brave lads who dared the open seas in their longships, reddened the altars, and made off with a small fortune in silver in the process. Nothing like doing well by doing good. 😉