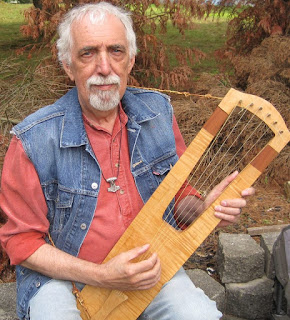 I was just informed that a long-time member of the Heathen community, Lavrans Reimer-Møller (aka Larry Miller) died on Wednesday of complications from cancer, at the age of 75. I knew Lavrans for twenty years or so, and although we had out differences and disagreements over the years (he was no saint, to be sure, and could be a stubborn and crotchety cuss), he was a true and good friend and will be missed.

Lavrans will be remembered as a skald, with his love of and talent for music, with which he graced many a sumbel-hall over the years, as well as making many presentations on the use of music in Asatru ritual. He was a scholar, producing the newsletter “Marklander” for many years, containing articles covering topics all over the Heathen spectrum, and producing his own writings on astrology within the Germanic world-view and a series of YouTube videos on the Nine Worlds. He was a craftsman, making and selling tafl sets and Germanic lyres; in fact, I think I might have bought his last lyre right before he passed away. It’s something I’d been wanting for years, and I am glad I was able to tell him just how beautiful it was when it arrived. Although he remained mostly independent throughout his time as an Asatruar and Theodsman, he was a fixture at various events throughout the region, most especially East Coast Thing, and was a member of the Normannii Theod for a time as well.

In his non-Heathen life, he was a radio DJ and college professor, as well as a musician.

Hel’s hall received a Heathen of fine caliber this week. I will miss you, my friend.