A notable, but often unclear, event is described in Völuspá stanzas 21 – 23:

She [the volva] dispute remember, the first in the home,
when Gullveig geirum [“spears”] supported,
and in Hárs hall they burn her;
three times burned the three times born,
often, not seldom, yet still she lives.

Heidi she height, to the house came
the wise volva, woken she neighbors,
magic she knew, magic she joyfully,
friendly always for angry maidens.

Then went reigns all to their ruling seats,
the high-holy gods held council:
whether Aesir should sacrifice offer,
or should gods all the tribute* own.

* Wikisource has “guild” here, which makes no sense compared to the primary meaning of the ON word gildi.

It’s worth noting that the literal translations of the names are:

Many people, rightly in my view, see this as some sort of ritual captured in poetry and metaphor. But it does present certain problems. Most glaringly, the math doesn’t quite work out. If Gullveig was born and burned three times, she should be dead:

…but the text clearly says “still she lives”. Either she was (re)born a fourth time, or there’s something else going on here, like maybe burning her didn’t kill her, exactly. (And it should be pointed out that the ON word borin means specifically “born”; if the author meant “reborn” the word used would have been endrborinn, so the author isn’t just counting rebirths.) It’s also interesting that “still she lives” would imply that whoever (or whatever) Gullveig is, she is still alive at the time the volva in Voluspa is talking.

If the intention was to flesh out the three lives (and by association, three names) of Gullveig, then there would be information about a third name in stanza 23. But it does not complete the expected triptych of the previous stanzas; it begins to describe the Aesir-Vanir war mentioned in stanza 21. If the intention of the poet was to describe the three lives of the creature who started off as Gullveig, why only give details (scanty though they are) about the first two lives?

Most readers make the assumption that these two figures of Gullveig and Heidi are the same, and the second stanza is merely a continuation of the events in the first. Völuspá is a very tough poem, and tends to jump from subject to subject without warning, and it’s by no means a certainty that stanza 22 is continuing the events of 21. I am going to veer into iconoclasm and state that I do not believe Gullveig and Heidi are the same figure, and stanzas 21 and 22 are talking about two different things.

And, if my theory is correct, she is somehow connected with humans offering sacrifices to the Aesir in the same way that they offered sacrifices to the Vanir, thus beginning the conflict. To my mind, the answer as to Gullveig’s identity is obvious; she is a metaphorical embodiment of the holy mead (or ale) used in sacred feasts and sumbel. This mead, kept in a cauldron supported by a tripod (in Odin’s hall, this tripod is made out of spears, as are the rafters of Valhalla), is passed over the fire three times to hallow it, or metaphorically bring it to life. In essence, she represents the formal ritual structure of those who follow the Aesir, with its use of fire to consecrate and its emphasis on the number three.

And this interpretation also removes the ominous associations with evil that Gullveig has in the minds of many. Her burning is not in the sense of an evil witch being burned at the stake; it’s essential to her being “born”; i.e., sanctified and able to carry the sacrality of ritual. Her life and death is described in the stanza in the same way that the Ballad of John Barleycorn embodies the life and death of the barley plant in the brewing of beer. Her three births are reenacted in every ritual (“often, not seldom”), in the passing of the sacred drink around the fire (“burning” it) three times.

Thus, she is a different individual than Heidi, described in the following stanza, setting up the two sides of the conflict to come. 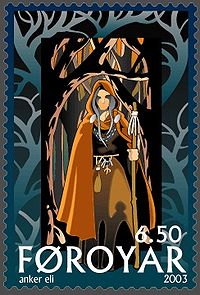 Heidi is more straightforward. Here is what we know about her from the text:

Many scholars have associated Heidi with Freyja, and this makes sense based on Ynglinga Saga 4:

Njord’s daughter Freya was priestess of the sacrifices, and first taught the Asaland people the magic art, as it was in use and fashion among the Vanaland people. (Samuel Laing translation)

But if there is no real reason to associate Gullveig with Heidi other than the fact they are discussed in successive stanzas in Voluspa, then there’s no reason to associate Freyja with Gullveig, and it removes any negative connotations associated with Gullveig into the bargain. This neatly solves one of the problems with the Gullveig-Freyja association (the fact that the Aesir would have burned her to death three times, but it wasn’t the Vanir who initiated the war, but the Aesir), and I daresay this separation provides a stronger justification for the Aesir-Vanir war than the notion that it was launched because the Aesir burned Gullveig to death (unsuccessfully). The root of the war was the question of which tribe, Aesir or Vanir, deserved the fruits of the ritual offerings.

2 thoughts on “Gullveig, Heidi, and Freyja”