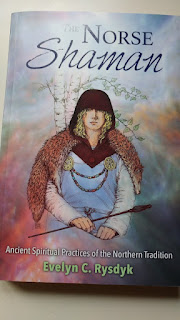 Verily, there is a blight upon the landscape within Heathenry. Not only is it seen where such an absurdity might be expected — among the Norse Neopagans — and of course where such nonsense flourishes — the neopagan, wiccan, and other fluffy communities — but (so tells me a little bird who witnessed a workshop, complete with PowerPoint presentation, on this very theme not too long ago) within the heart of what I might otherwise call “real” Asatru itself.

That blight is called Norse Shamanism, often masquerading as the historical Norse practice of seiðr.

It’s worth beginning with the most egregious culprit, The Norse Shaman by Evelyn C. Rystdyk. Although she does, in an Author’s Note at the very beginning, say “This book is not connected with the neo-pagan religion of Asatru [sic], nor is it an attempt at accurately re-creating Viking Age traditions,” that is precisely what goes on in the pages of the book, where we see what would otherwise be an hilarious mish-mash of Harner-style shamanism (itself torn apart most satisfyingly by Yngona Desmond), New Age interpretations of quantumn physics (including the perennially abused concept of “quantum entanglement” being used to explain how people are connected to nature!), and most importantly, an attempt to cram Norse mythology into a Shamanic framework.

Indeed, that’s the heart of the problem, and it’s not at all unique to Ms. Rysdyk’s book. It is, indeed, endemic throughout Asatru and neo-paganism (which are two very different things, as I’ve noted time and again). Without actually delving into the surviving lore on historical seiðr — except for possibly reading chapter 4 of Eiríks saga rauða — people see the phrase “Norse Shaman,” and start plugging in Norse and other Germanic concepts and names into authentic Siberian shamanic practices or neo-shamanic neopagan/new age practices, and voila! They think they have recreated seiðr.

And why not? Isn’t that what seiðr is? Shamanism as it was done in Scandinavia? 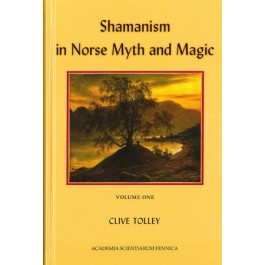 Therein lies the issue, and this is why we see a sort of seiðr in contemporary Asatru that looks less and less like the magic described in the sagas and other sources. These differences are laid out plainly in Clive Tolley’s encyclopedic two-volume study, Shamanism in Norse Myth and Magic (all quotes come from that work unless otherwise noted):

The functional correspondence between seiðr and shamanism is minimal; several roles typical of the shaman are scarcely or not at all associated with the seiðkona, and both the divinatory and efficatory roles of seiðr are more pronounced than in shamanism. … The effecatory aspects of seiðr are, in any case, subordinate to the divinatory — the practice’s main purpose, as it is presented in surviving sources, is to uncover the future or gain knowledge of facts that could not otherwise be determined. (vol. 1, p. 142)

Trees are important in both Norse and Siberian mythology, but that’s not evidence of some sort of shamanic equivalence:

Despite the points of similarity, which can be illuminating for the interpretation of the Norse texts, there is ultimately little about the Norse tree that can be described as fundamentally specific to shamanic practice or belief (vol. 1, p. 368)

Some people see in the Norse god Heimdallr a shamanic figure, but there’s a key component missing that takes all the wind out of those sails:

Yet without a ritual engagement by practitioners, the shamanic aspect of the god [Heimdallr] remains unfulfilled (if we accept that shamanism is something that is performed, not merely a system of spiitual notions). If any such engagement once existed, it has left no trace. (vol. 1, p. 405)

Óðinn is, indeed, a figure associated with magic, and seiðr in particular, and many people see parallels in certain Óðinnic myths and shamanic initiation. However, when one looks closely at the myths themselves, as Tolley does exhaustively, what seemed promising on the surface turned out to be illusory:

The four myths of Óðinn undergoing suffering to gain supernatural knowledge show a superficial resemblance to shamanic rites of initiation. However, closer examination has revealed that, while certain details are indeed comparable, over all the Norse myths lack many of the typical elements of shamanic initiation. (vol. 1, p. 462)

And as for rituals, once again, there’s no “there” there when one looks for commonality in the sources, both Norse and Siberian.

Old Norse records afford us no account which matches the detail found in the examples of shamanic kamlania discussed at the beginning of the chapter; we therefore lack the wherewithal to make anything but tentative assertions about the shamanic nature of Norse practices or traditions. An investigation into some of the key Norse texts which have been used as evidence of a shamanic element in Norse religious practice has revealed that they are of spurious value. … It would appear that the seiðkona would enter a trance, almost certainly of a light sort, during which she no doubt obtained information from the spirits, but no Norse account points to the sort of vivid interaction between magician and spirits that the shamanic kamlania indicate. There is no evidence for the sending out of the free soul during the practice of seiðr, although the notion of the soul wandering in animal form existed. (vol. 1, pp, 516-517)

That last sentence is also key to debunking a favorite practice of modern “Norse Shamans” (particularly Hrafnar out in California); guided meditations and trance-journeying to other worlds. While this is absolutely something that is seen in classical shamanic practice, there really isn’t any equivalent for humans “walking the worlds” while in trance. Going forth (in animal guise) in this world, certainly. But touring Ásgarðr, or Jǫtunheimr? Nope. (And ditto for evidence of possession or “horsing”!)

Descriptions of the vǫlur’s attire have been shown to be unreliable as witnesses to pagan customs. The dress in Eiríks saga rauða has its purpose within the saga (as discussed also in the previous chapter), but in terms of shamanic parallels it is unconvincing; in particular, it lacks the functional and integrated symbolism of the magical practitioner’s costume. (vol. 1., p. 549)

This is one of my favorites, and one I had no idea of until I read Tolley’s book. It turns out that the vǫlur’s clothing described in that famous account (the blue robe, catskin gloves, etc.) is nothing more than an inversion of a contemporary Christian bishop’s attire, used to make a point about their relative positions in society, not a reliable account.

The norse vǫlva seems characteristically to have operated from a raised dais or equivalent; this has only the vaguest parallel within shamanism. Its primary function must be to imply wider vision, so the seeress is pictured as seeing over the worlds, rather than travelling through them, or under them, as the shaman characteristically does. (vol. 1., p. 550)

Again, the key point here is that traveling through other worlds is common in shamanism, but it’s not seen in seiðr.

My investigation has, over all, found little grounds for proposing the presence of shamanism in pre-Christian or later Scandinavia, if by that is meant the classic form of shamanism typical of much of Siberia. The evidence does, however, support the likelihood of some ritual and belief of a broadly (but not classically) shamanic nature as existing and being remembered in tradition. (vol. 1, p. 581)

And that’s the point in a nutshell, with the added commentary that just because the Norse practice of seiðr is not connected, except superficially, to classical shamanism, that doesn’t mean the Norse didn’t have some sort of magical practices (as some try to assert, when faced with criticism of their Norse Shamanic practices; “you just don’t believe in the magic side of Asatru at all!”). It just means that those practices don’t look like classical shamanism, and by and large they don’t look like what most people who say they practice seiðr do, precisely because those practices are based on shamanism, rather than an in-depth study of what the sources do tell us about seiðr and related Norse magical arts.

3 thoughts on “Gods save me from “Norse Shamanism””