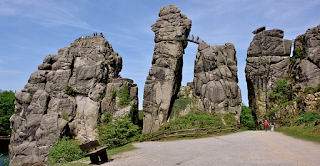 Out of Germany comes very disturbing news. Apparently on New Year’s Eve some enterprising but misguided people broke into the nature reserve at Westphalia that contains the historic Externsteine rock formations, scaled a 180′ pillar of stone, and erected a 20′ tall wooden Irminsul painted red, white, and black. It was removed almost immediately.

Links to the news (in German):

Let us be blunt. This is a defacement of an historic site. As such, it is an abominable act, and the people responsible need to be caught and punished to the fullest extend of the law, period. There’s no telling the damage that could have been done in hauling a 20′ Irminsul up a 180′ rock face, which could have rock carvings, artifacts, etc. that could have been damaged in the attempt.

Naturally, the Norse Neopagans here in America and some German media are predictably focusing on potential connections with right-wing pagans in Germany. While this is a connection which, it must be conceded, quite likely given the colors of the pillar, which echo those of the Nazi and Imperial flags of pre-1946 Germany, it’s not at all the point, and those who are using it as a political club to hit their political opponents should be ashamed. This sort of thing transcends politics, and should be something that everyone can agree is wrong. 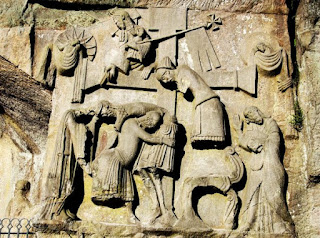 Personally I don’t care about the politics of the idiots who did this. I care about the stupidity of defacing an historical landmark to make some sort of statement. It would be just as wrong if a Norse Neopagan took a pick-axe to one of the mounds at Uppsala because Loki told him to. Politics is no excuse for stupidity.

And this stupidity is compounded by the fact that the connection between the historical Irminsul and the site at Exernsteine is completely spurious. The image found there is a palm tree, bent over to represent nature weeping over the death of Christ. It is not the Irminsul, which was described in the sources as a pillar. Not a pillar with wings. Hel, for that matter, the sources say that there were many Irminsuls, each the center of worship for a particular local group. Not one at some great pan-Germanic cult center that is otherwise completely unattested, and especially not one at Externsteine.

That makes this act all the more tragic. These idiots broke the law and endangered an historical archaeological site to haul a 20′ palm tree painted in the colors of two failed states to the top of a mountain. All that effort and risk for an unintentional joke. Morons.

Update: here’s a photo showing where the Irminsul was planted.