Next Monday, the History Channel will debut a new show, Forged in Fire. Each week, a group of master swordsmiths will have to produce a weapon in a very short amount of time, with one getting eliminated each week until there’s a champion. So it’s arranged sort of like those cooking contest shows on Food Network. This shot from the commercial did happen to catch my eye, though (click to embiggen): 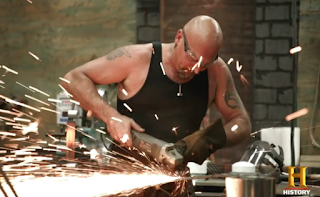 That’s clearly a Thor’s Hammer he’s wearing. Anyone know who he is? The show’s website doesn’t list the names of the contestants.

Looks like an interesting show; I’ve already set my DVR.