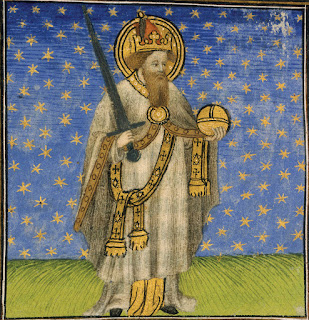 I just posted the following update to my post on Some thoughts on Ēostre, specifically dealing with the quote from Einhard’s The Life of Charlemagne that Ms. Emerick claimed was “backup” for Bede’s claims. Here’s the passage from Einhard, and then my new analysis, which has been incorporated into my original post.

In fact, here’s the relevant passage from chapter 29 of Einhard’s work:

In re-reading the passage from Einhard, I realized that, rather than being a “backup” of Bede, the passage from Einhard actually undermines the idea that what Bede is presenting is a pan-Germanic concept. Note that the passage says “He gave the months names in his own tongue, in place of the Latin and barbarous names by which they were formerly known among the Franks.”

Those weren’t the original names the Franks called the months. In fact, Einhard goes out of his way to say Charlemagne replaced the Frankish names with these names. In the specific case of April, he replaced it with a form derived from Bede’s account. Why would the Champion of the Faith replace a “barbarous” Frankish month-name with a pagan Anglo-Saxon month name? Wouldn’t he replace it with a name that was by the early 9th century (Einhard states the month renaming happened after Charlemagne’s coronation in 799 CE) associated with Christianity, rather than paganism? One which was popularized not only by Anglo-Saxon missionaries, but which was ensconced in one of the most widely-distributed works of Christianity at the time?

No, this doesn’t “back up” Bede at all. It derives from Bede. Charlemagne replaced the “barbarous” (i.e., pagan) Frankish name with a good Christian name, because that’s what the Anglo-Saxon missionaries were calling the celebration of the resurrection, and that would be completely consistent with Charlemagne’s political and social policies of the time.