It’s probably not a question very many Asatruar ever ask themselves, but Eirik Storesund, writing at Brute Norse (great name for a blog, btw), says no, The “Valknútr” Does Not Exist. It’s worth reading the whole thing over there; I’m not going to respond to everything he says, at least not verbatim. It’s a very interesting article, though, and worth the time (it’s not too long).

His conclusion is thus:

From a source-critical viewpoint there can be no doubt that the term *valknútr/valknutis dubious and unhelpful. Evidence suggests that the symbol’s original contents go far beyond the common themes of interpretation, which are none the less fossilized in both scholarly and neopagan discussion. There seems to be more to the symbol than death and sacrifice.

I can’t offer a good alternative name. Gungnishjarta is too tentative, but maybe I am overplaying the harm a misnomer can do. Nevertheless, I think that the terminology has done more to cloud the symbol, rather than clearing it up. This should concern anybody invested in shedding light on pre-Christian Scandinavia.

Now, I hadn’t given the matter of the valknut* much thought. Like 99% of the Asatruar out there, I just figured the term and the interpretation were so ubiquitous that it was a given. That’ll teach me to not check primary sources on anything I read, even in a scholarly source. Turns out that Storesund is entirely correct when he says that the term is completely made up, and especially the association of the term with the three-triangles symbol.
I’m going to go out of order and address the Hrungnir hypothesis next, because I think it’s an easy one. Unfortunately for those who espouse the idea that the hrungnishjarta mentioned by Snorri refers to the three-triangles symbol (such as Rudolf Simek**), the notion is contradicted by a very fundamental fact. Snorri mentions that the symbol known as hrungnishjarta has three points, like the giant’s heart:

Hrungnir had the heart which is notorious, of hard stone and spiked with three corners, even as the written character is since formed, which men call Hrungnir’s Heart.

The problem is, the three-triangles symbol commonly (and now we know mistakenly) known as a valknut has six points, not three. Geometry is not a friend to this hypothesis. Although it’s certainly possible that Snorri was being somewhat less than literal in his description, the only thing I can think of that would really fulfill the three spiked corners criteria is what is commonly known as the triquetra: 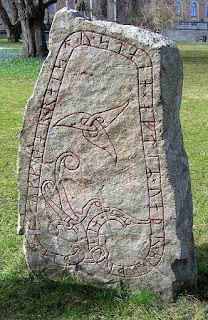 That brings us to what would seem to be the most interesting, if difficult to prove, element of the argument; that the three-triangles symbol (TTS) is found more often in a context that is not suggestive of Odinic sacrifice, but something else, possibly related to a horse-cult (which itself is suggestive of Freyr). This is really where it all comes to fruition, because even if the word valknut isn’t the correct ON term for the TTS, that doesn’t mean the symbol itself isn’t associated with Odinic sacrifice. A survey of the inscription evidence is needed to make that determination.
I confess I don’t know of any sources in English that really give a truly comprehensive study of three-triangle symbols on Norse picture-stones. There’s a book in German on the subject of the valknut, which I don’t have (and I’m not sure my German skills would be up to the task of reading), but I’m not even sure it would have the sort of comprehensive survey I’m thinking of.
That said, I will rely on the next best source available, and turn to Google image search, recognizing it is not necessarily comprehensive, and certainly not systematic. We do, however, come up with a number of examples:
This is perhaps the most Odinic context of a valknut on any picture-stone. We’ve got a clear sacrifice, we’ve got ravens, and we’ve got what looks like a spear. It screams “Odin” and is the chief source of the association of the three-triangles symbol with Odin. Odin is even seen in another frame of the stone, riding Sleipnir and being offered a horn of drink by a female: 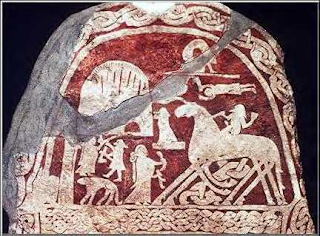 Note that there’s no valknut here, but there doesn’t need to be. The identification of Odin is certain due to the eight legged horse he is riding. The identity of the figure offering drink is somewhat less certain, however; it could be a valkyrie, it could be Frigg, it could be a mortal noblewoman offering drink to a traveler whose true identity is unknown to her. I tend to think it’s one of the first two choices, however, although it’s very possible this refers to some other myth involving a cave, a dog/wolf, Odin, and the other figures in the panel.
This one is probably a big source of Storesund’s and Hellers’ association of the TTS. There are three of them under the legs of the horse, after all, and another one behind the riding figure’s head. But look at the whole stone, and you’ll see something interesting: 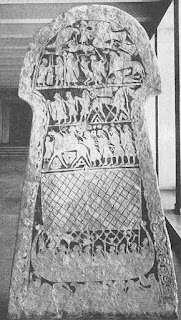 Yes, that’s Odin’s horse sleipnir on the row above the horse with the valknuts between its legs. You can tell because it has eight legs, of course. And it’s worth noting the warriors that are following the figure on the horse; see what they’re carrying? Rings. And what’s a kenning for a King? “Giver of rings” (i.e., one who distributes wealth to his retainers). So here we have context for something Odinic, even if we don’t see a sacrifice per se. Odin is the god of kings, and his horse is right above the image of the leader handing out rings.
Unless you think the stone is showing a bunch of Viking warriors wielding chakrams, of course…
The Lillbjars stone is an interesting one, and is doubtless also related to the possible identification of the valknut with horses. Here we see a figure on a horse. There’s nothing to really identify him as Odin, other than the presence of the TTS and what seems to be three interlocking horns (possibly representing the three droughts of mead Odin stole). As we saw above, a female figure offers the figure on the horse a drink. There’s really nothing particularly Odinic about this figure.
What I find interesting about this image is the fact that it is very, very close to the image we see on the Lillbjars stone, with a ship below and a female figure offering drink to a man on horseback. But here there’s no TTS. The image of a woman offering a horn as a sort of welcome to an incoming warrior, or leader, is a relatively common one. We see it possibly most famously in Beowulf, as Wealtheow offers drink to the guests in the hall. This could easily be a representation of that scene, as a matter of fact; Beowulf with his warriors arrive in Denmark by ship, and he is welcomed with drink.
There are (many) other images of the TTS, but all the ones I’ve found are out of context; just inscriptions on box lids and the like.
So where does this leave us?
I think there’s definitely room to question the significance of the TTS, although I think Storesund overstates his case. It’s only seen in one overtly sacrificial context (and that context pretty much can’t be questioned; it looms over the death, there are ravens and a spear, and Odin appears on the same stone in a different panel). But the other instances don’t necessarily map to anything Odinic; one is a “giver of rings” on horseback, and another is a leader of some sort, also on horseback.
I might argue that the fact that they’re on horseback is incidental; what matters is that they are leaders. Indeed, that seems to be the only element of commonality in the picture-stones that I can tell. We have a sacrifice (which could be a jarl or other leader), we have a giver-of-rings (which is a leader), we have a figure being welcomed by a woman with drink (which is most probably a leader).
I see a pattern here, but it’s not necessarily Odinic, and it’s not necessarily horse-related.
Could what we today call a valknut really have been a symbol of leadership/jarldom/etc. to our ancestors? Now that Storesund (rightly) opens up the question, I think it’s worth exploring, although I don’t necessarily agree with his conclusions. It’s consistent with the examples I cited above (although it would imply that the scene on the Stora Hammar stone is a leader being sacrificed to Odin, that’s perfectly possible), but I’m not drawing any firm conclusions, and at this point it would be a hard row to hoe to change the popular conception of what the TTS means, but I think it’s worth a more detailed and comprehensive look than I’ve been able to give here.
_____
* Most of the time I’m going to refer to this as the “three-triangle symbol” or TTS for purposes of this article
** Rudolf Simek, Dictionary of Northern Mythology, “Hrungnir’s Heart” entry

2 thoughts on “Does the Valknut Exist?”