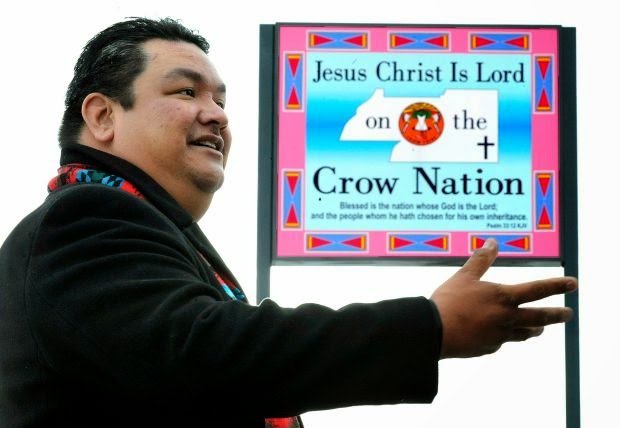 There’s a new sign on the Crow Indian Reservation along I-90 in Montana.

Back in March of 2013, the Crow government (an independent Amerindian nation) passed a resolution proclaiming that “Jesus Christ is the Lord on the Crow Indian Reservation.” In that resolution, they acknowledged that Christianity was a foreign religion imported by missionaries during the 19th century, and also that many of the Crow tribe “still practice traditional spiritual customs”, which they claim “are compatible with Christian principles”.

Now, they certainly have the right to make any proclamation that they want to, just as I have a right to bemoan that decision, even though I am not a Crow or Amerindian in any sense (at least so 23andme.com assures me).

I might disagree with the notion that traditional Amerindian spiritual practices are compatible with Christianity, which embraces doctrines such as that of John 14:6 “No man shall come to the Father except through me”, which would seem to contradict the traditional Crow religion that embraced a world of many spirits, including Old Man Coyote and Raven Face.

Now the Crow have gone a step further and erected a huge sign that reflects the tribe’s official embrace of Christianity. So that every time someone who does still embrace the traditional Crow religion drives by, they’re reminded that their faith has been officially overthrown. But that’s okay, because it’s not meant as a put-down to those who still follow the old ways of the tribe:

“[Tribal legislator Conrad] Stewart said that, while the tribe’s public profession of faith could be seen as controversial, it isn’t intended to make non-Christians, including those who observe traditional Native American spiritual practices, uncomfortable.”

Because a big, honkin’ sign put up by the government saying “our religion, not yours, rules here” couldn’t possibly make anyone uncomfortable.

I cannot imagine that Thomas Yellowtail would have approved.

Now, even though I don’t have any connection to the Crow myself, I do feel strongly about this because it reflects precisely the same sort of surrender to a foreign god that my own ancestors undertook a thousand years ago. It reflects the convert-or-die attitude that figures such as Charles the First, Harold Bluetooth, and Olaf the First. First they come in quietly and meekly, and only convert those who wish to be converted. Then, once they have gathered their strength, they impose their faith on everyone.

It was an enormous shame on our Folk a thousand years ago that they abandoned their Gods for a foreign deity. I hope the Crow can shake off this yoke and return to the ways of their ancestors.