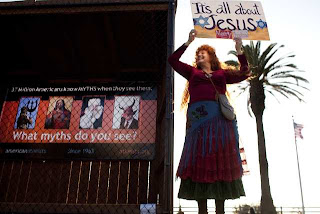 In 1993, Jay Sekulow, chief council for the American Center for Law and Justice (ACLJ), argued a case before the U.S. Supreme Court entitled Lamb’s Chapel v. Center Moriches Union Free School Dist. The ACLJ was formed by conservative Christian leader Pat Robertson as a counterpoint to the liberal ACLU.

Lamb’s Chapel established the at-the-time unique precedent that it was not the Establishment Clause of the First Amendment to the U.S. Constitution that applied in cases where religion was being inserted into public schools, but rather the Free Speech Clause. Speech is speech, and “viewpoint discrimination” based on the content of that speech was no longer legal in the United States. Subsequent Supreme Court decisions (notably 1995’s Rosenberger v. University of Virginia) reinforced the point.

The practical application of this new legal philosophy could be summed up by a phrase that Sekulow uses ad nauseum on his daily radio broadcast; “If they (“they” meaning any government entity, especially schools) let one group in, they have to let every group in, even evangelical Christians.”

Flash forward to 2012; we read in various places of the latest front in the “War on Christmas”; Santa Monica, CA.

Specifically, in recent years the city, acting under the strictures of the Lamb’s Chapel case, opened up their longstanding tradition of allowing churches to put up Nativity scenes on city property, deeming (rightly) that the doctrine of “viewpoint discrimination” meant that if they let one group in, they had to let them all in. In this case, that meant if they let the Christians put up crèches, they had to let the Atheists put up their own displays. Something that would not have been possible without Jay Sekulow’s argument in Lamb’s Chapel.

Since there was limited space, they ended up resorting to a lottery to assign space. Last year, so many Atheists won slots in the lottery that this year, they ended the practice altogether.

Naturally, the Usual Suspects are complaining about the “war on Christmas”; that they’re being persecuted because some other group is daring to exercise the same right that they themselves bludgeoned through the Supreme Court.

The flip side of “if they let anyone in, they have to let everyone in” is that “they” can decide not to let anyone in. That works as well for space at Christmas in front of town hall as it does for space in the public school on weekends or after school. But it’s all or nothing. Boy Scouts are in, the Wiccans are in. Girl Scouts in? Asatruar are in. You got 4H? You got Druids. Manger scenes? Scenes of the Death of Balder or simple signs stating your view of the significance of the season. You get the idea.

Space for meetings and rituals is often difficult to come by for Pagan and Heathen groups. Libraries don’t always have meeting and classroom space, private homes are often not an option for a variety of reasons, Pagan bookstores can charge enormous sums for space, and municipal community spaces can be either non-existent or difficult to come by. But thanks to Jay Sekulow and Lamb’s Chapel, a whole new venue—paid for by the hard-working, 73% Christian taxpayers—is now opened up to the Pagan and Heathen community.

Now, this is not a call to proselytize. It’s just pointing out that there’s a resource out there, fully legal and established law for nearly 20 years, that says that government facilities can’t discriminate based on viewpoint. And Paganism is a viewpoint. Heathenry is a viewpoint. Wicca is a viewpoint. Just the same as Christianity is. We are legally entitled to use the facilities available. It would be a shame not to take advantage of that opportunity.

One thought on “Careful What You Wish For”