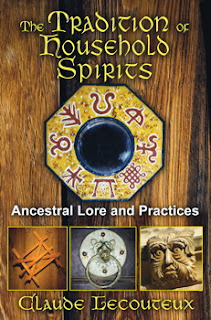 I am a huge fan of scholar Claude Lecouteux’s work. A professor of medieval literature and civilization at the Sorbonne, his knowledge of European folk-customs, particularly those of the Germanic peoples, is simply encyclopedic, and every one of his books is a treasure-trove of knowledge both obscure and well-known, all put into a single coherent context that supports his narrative.

The Tradition of Household Spirits (Inner Traditions, 2013) continues this trend, this time focusing on the various house-gods, brownies, tomten, and other spirits of the house and hearth that populated (and, in places, still populate) Europe.

He begins with a study of the architecture of pre-modern European homes and other buildings, exploring how the physicality of one’s living spaces accommodates, and in many cases is influenced by, one’s beliefs about the spirits of place and home. The placement of corners, hearths, doors, and windows are all examined, setting the scene for an in-depth discussion of the spirits which inhabit those places.

There follows information on the nature of these spirits, how they differ from, and in many cases are related to, the various “spirits of place” which are more normally found outside and in more wild or agrarian settings. The origins of these spirits (often related to departed ancestors and the aforementioned spirits of place) is covered in depth, as well as how they were (and, incidentally, may be) approached, and finally how they relate to the spirits of the dead and their possible connection to the notion of the dead returning to haunt or otherwise interact with the living. The latter is a particularly important theme in Lecouteux’s work, and he has actually devoted entire books to the subject of ghosts, vampires, and the Wild Hunt.

The whole is rounded out with a collection of nuggets of folklore relating to house-spirits, the Alfar (Norse elves), and a thorough selection of recommended reading (often in French, of course, but with many works in other languages including English) and extensive end notes.

This book is invaluable to modern Ásatrúar who wish to develop more of an understanding of, and begin a practice of honoring, their house-spirits. All too often contemporary Ásatrúar focus on the Gods to the exclusion of those spirits who are “closer to home”, so to speak, which is a great shame and which robs us of a great deal of texture and nuance in our beliefs and practice. After all, what could be more “close to home” than a house-spirit dwelling in one’s own home?