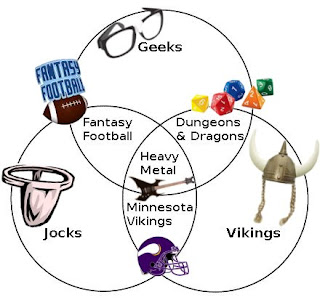 There exists within the Asatru community a bunch of folks who look down on Asatruar who have the “wrong” hobbies.

They seem to think that Asatruar who live in 21st century post-industrial societies should scorn popular culture, and have interests that only intersect with our Heathen faith. Mead brewing, archery, and blacksmithing are held to be acceptable. Liking Star Wars, football, television in general, video games, or being able to quote lines from “The Big Bang Theory” are not. Somehow if you play D&D, you can’t be a “serious” Asatruar.

Well, I’m about as “recon” an Asatruar as you’re going to find (I don’t do “hammer hallowing rituals” because they’re not historical), but I’m not ready to give up on indoor plumbing, vaccinations, or Star Wars. I live in the 21st century, and while I see absolutely nothing wrong with blacksmithing or archery or mead making (I tried once, and the resulting liquid was quite handy in stripping varnish off of an old dresser), I’m a creature of the culture in which I was raised, and that’s not going to change, even as I strive to adopt a Germanic mindset.

Are there good arguments for eschewing television? Absolutely. Does failing to do so somehow make you less of a Heathen? Absolutely not. Our Gods are thousands of years old, but that doesn’t mean we have to pretend like it’s 793 CE. Sometimes you just want to have fun, modern fun, and there’s nothing wrong with that.

So the next time someone rags on you for playing D&D once a month, or following the Patriots, or going to a Brit Floyd concert, ask ’em how that 79 year life expectancy is treating them.