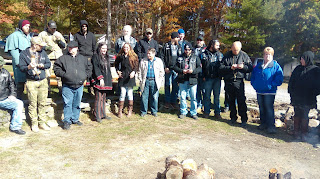 From the early days in the Asatru revival in the 1970’s and 80’s, the ceremony of blót, or sacrifice, has predominated. It has lost its original primary meaning of an animal sacrifice, although the practice has not entirely died out, and many of the more traditionalist groups within Asatru embrace it, but on the whole, the blót remains the primary ritual within Asatru in North America, and I daresay around the world.

And what does that blót entail? Usually, based on the early works of Edred Thorsson and Kveldulf Gundarsson, it consists of a sacrifice of mead, which stands in for the original blood of the animal sacrifice. Often, the participants are sprinkled with the sanctified mead, in emulation of the description of the disablót in Heimskringla.

Also often, the participants will make a toast to some god, often the god to whom the blót is dedicated, in a circle:

This sort of blót / sumbel hybrid has been christened a “bumble” by certain wags in the early 2000’s, as it is a combination of the rituals of blót and sumbel, and is entirely ahistorical.

At some point in the late 80’s and early 90’s, the ritual of sumbel came into fashion within Asatru. My personal theory is that the Theodish emphasis on sumbel had an influence on its adoption within Asatru. This is the ritual drinking of toasts as described in Beowulf and other sources. The “toasts to three gods” described in Heimskringla was somehow morphed into three “rounds” of toasts, where the first round consists of toasts to gods, the second round is toasts to ancestors and/or heroes, and the third is an “open” round for various other sorts of toasts, gifting, and so forth. And no food is to be eaten; it’s all about the drinking.

This, too, is a somewhat inaccurate interpretation of the sumbel as a ritual, but perhaps not as wayward as the blót as it is currently practiced.

As might be surmised, I’m not a fan of either the bumbel or the sumbel as it exists today, from an historical perspective. But what I’m really aiming at here is that this emphasis on the blót and sumbel has blinded most modern Asatruar to other forms of ritual that are no less traditional and historical, but which have largely been ignored for the last forty-plus years of the modern Asatru revival. 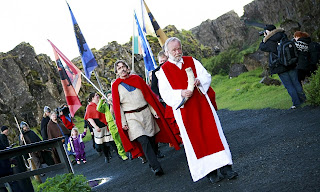 English, Scandinavian, and German folk-practices are replete with procession ceremonies. But what strikes me is that the goal of the ritual isn’t to process to a specific place, where another ritual will then be held, but the procession itself is the ritual. This recalls the mentions of perambulations of god-images in Tactitus’ Germania, as well the Sagas of Icelanders and Heimskringla.

In more modern times, we see this sort of procession-ritual in the parades of Krampus and his associated figures in the Alpine regions. The parade and its associated customs are the point of the ritual. There are specific skits, or short plays and readings, that accompany these visits by the performers. It’s not difficult to draw a line between processions of god-images in pre-Christian times and processions of pagan-like figures in post-Christian times.

This is likely linked to both ritual guising, wassailing, and visiting traditions that have endured for more than a millennium after the conversion.

That some of the poems that survive to us in the Poetic Edda might be recordings of “scripts” for ritual dramas is an old theory, and one that is not only well-supported by an examination of the poems themselves, but which has been embraced by modern scholarship as a whole. The use of present-tense case in some of the poems (“Freyr says” instead of “Freyr said”), and the inclusion of what could be termed in modern parlance as stage directions in the text, leads to this conclusion.

Several years ago, as I have mentioned more than once on this blog, we did a three-part ritual drama enacting the exile of Odin, the rape of Rindr, and the return of Odin, linked to the tale of Balder’s death, and leaning heavily on Saxo’s account. But the possibilities for modern dramas around mythological themes are nearly endless. 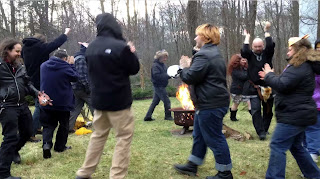 We know for a fact that the pre-Christian Gemanic peoples danced in a religious context, and we know it precisely because the Christians wrote extensively about how awful it was that people were still engaging in such awful pagan practices. Obviously, we don’t know what the dances themselves looked like, but there is a full and vibrant tradition of folk-dance from England, Scandinavia, and Germany to draw upon.

There’s a whole “code”, almost, of telling stories through the dances themselves, as we see in English Morris dancing particularly. There are also images from pre-Christian Scandinavia that show sword-dances and spear-dances, performed by warriors in animal guise. The theory is that this is somehow linked to the ulfedhnar and berserker cults, but the practice is widespread enough in pre-modern times, especially because of the many, almost hysterical, Christian prohibitions, to warrant assuming that ritual dance was a part of pre-Christian religion.

These sorts of rituals can take a whole array of forms. Water-sprinkling of newborn children to give them a name. Weddings have several distinct steps, none of which particularly involve a sacrifice. Funerals have a whole other series of rituals, culminating in the arvel feast. Each of these has a whole rhythm and structure to it, beyond the standard blót format into which everything seems to be squeezed nowadays.

There’s so much out there that our ancestors did that don’t fall into the neat categories of blót and sumbel. It’s a shame that modern Asatru seems so fixated on blót, and to a lesser extent sumbel. There’s so much else that we could be doing that is just as much a religious ritual as a blót, and it all seems like it could be so very engaging. Much more so than standing around a field saying “Hail Thor!” over and over again…