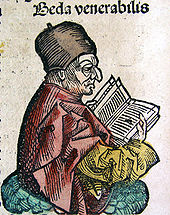 Recreating pre-Christian Germanic calendars is not an easy task for a variety of reasons. But even some of the better sources we have can be misleading, as seems to be the case with one of the most often-cited texts on the subject; The Venerable Bede’s The Reckoning of Time. I’d like to discuss the two spring months he associates with goddesses who are otherwise almost completely unknown; Hrethmonath and Eosturmonath, which he states are named for the goddesses Hretha and Eostre, respectively:

The first month, which the Latins call January, is Giuli; February is called Solmonath; March Hrethmonath; April, Eosturmonath; May, Thrimilchi; June, Litha; July, also Litha; August, Weodmonath; September, Halegmonath; October, Winterfilleth; November, Blodmonath; December, Giuli, the same name by which January is called. … Hrethmonath is named for their goddess Hretha, to whom they sacrificed at this time. Eosturmonath has a name which is now translated‘‘Paschal month’’, and which was once called after a goddess of theirs named Eostre, in whose honour feasts were celebrated in that month.Now they designate that Paschal season by her name, calling the joys of the new rite by the time-honoured name of the old observance.  (Wallis translation, ch. 15)

Philip Shaw, writing in his wonderful Pagan Goddesses in the Early Germanic World*, posits that Hretha** is in fact a local goddess associated with a particular tribe or even more local group living in England. Eostre either falls into this same category or doesn’t exist at all, being a mere invention of Bede’s to explain a name for which he had no true explanation. The same, it must be said, might also be true of Hrethmonath and the goddess Hretha. 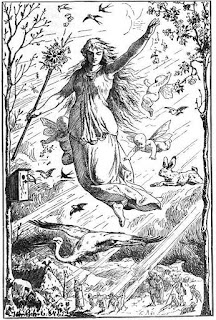 Setting aside the question of the existence of these goddesses, it is difficult to dispute the fact that the months themselves were named for some sort of feast / sacrificial offering that were made therein; that fits the pattern of other Germanic months such as Goiblót, which is attested in the written sources (see the Saga of Olaf Haraldson). That leads us to the logical question; are these simply Anglo-Saxon names for other feasts known from later Norse sources, taking place in, as he says, March and April?

The question is complicated by the fact that Bede makes it clear that the English “months” were based on the phases of the moon, rather than our modern system of having months that are independent of lunar and solar phases***, and states that the pagans started their months on the full moon and their year at Christmas (whether this is true or not is irrelevant for the current discussion; the point is, that’s what Bede thought, so that’s how he’s calculating dates).

So, when Bede says that Eosturmonath was the Anglo-Saxon name for April, what he really means is that it was the name for the 28 day period starting on the 4th full moon after Christmas, which is when he says the new year began. This could, in theory, place the month of Eosturmonath starting anywhere from late March to late April, and ending anywhere from late April to late May, depending on how the moons fell. Hrethmonath, and the sacrifice (“to Hretha”) which occurred then, happening the month before.

Whew! That’s a long spread to try to identify a corresponding Norse holiday. Perhaps the names of the months can yield some clue as to the nature of the holiday.

Turning back to Shaw, Hretha has two possible etymologies, depending on whether one thinks Bede meant hreda or hreða (apparently when he used “d” in a manuscript, it could fill in for both letters). Shaw deems a meaning of “speed” most likely as a straight translation based on linguistic evidence (as opposed to other, less likely candidates such as “victory” or “glory”), but thinks the name really derives from some ethnic/tribal ancestor-deity, similar to Saxnot or Gapt.

Eostre is no easier, and Shaw comes to a similar conclusion, believing her to be an ethnic goddess relating to a local tribe, possibly settled in Kent (due to an abundance of place-name evidence). He all but discounts the more popular meanings relating to “dawn,” “east,” and “shining.” Continental names relating Eostre to Easter he ascribes, not without warrant, to Anglo-Saxon missionaries carrying back the name, which by that time had been completely absorbed into the Christianity practiced in Anglo-Saxon England.

To take the two out of turn, fortunately we do have a very well-attested Norse holiday that happens in the period described for Eosturmonath. What the Icelanders call Sumarmál (“summer meal), which marks the beginning of summer, and at which Snorri tells us the “sacrifice for victory” was offered; sigrblót. This happened at the beginning of the Icelandic month of Harpa (“harp”), later (in Christian times) called gaukmánuðr (“cuckoo-month”; i.e., the month when the cuckoos would return). And that happens around April 21 (one month later than Bede says the pagan Anglo-Saxons marked the beginning of summer, interestingly; that is possibly due to the different climactic conditions between England and Scandinavia).

So I think what Bede was describing was the Anglo-Saxon equivalent of the later Icelandic holiday of Sumarmál / sigrblót. The timing is right, and the transition from one season to another (bearing in mind the Germanic peoples formally divided the year into summer and winter) fits with some of the more tangential associations of the name of the month, assuming the goddess was either a literary invention as most scholars seem to think, or a local deity pressed into service as Shaw implies.

That still leaves us with Hrethmonath and the associated goddess Hreda/Hreða. Unfortunately March is a slow month when it comes to Norse holidays, with nothing being attested that I’m aware of in either the Sagas or in later Scandinavian folklore. However, there is one thing that happens around that time of year, which is associated with a Christian celebration still very much practiced today, which could very well have some pre-Christian origins for at least a few of its associated customs.

The pre-Lenten season of Fastelavn, or what English speakers know better as Carnival or Shrovetide.

The timing is right; early March, and it is marked by a feast, as it is the last opportunity to eat well before the privations of Lent. And there are elements of Fastelavn that are unique to northern Europe, and distinct from Carnival as it is known closer to the Mediterranean. It’s also worth noting that this could be seen as the capstone of a series of holidays that deal with the symbolic fight against winter, trying to dislodge it, as seen in Thorrablot and Goiblot.

I’ll discuss the specifics in a future post, but for now, it seems like we’ve come to a very neat and tidy conclusion. Vestiges of the sacrifices that Bede speaks of around Hrethmonath might survive on in modern or pre-modern Fastelavn customs unique to northern Europe, but the goddess Hreda may or may not be a literary invention or a local tribal goddess pressed into service to give her name to the month.

The feasts that Bede describes as being definitive of Eosturmonath are equivalent to the later Norse sacrifice for victory at the beginning of summer (the connection to the change in season being lost due to the differences in climate). The goddess Eostre may or may not be a literary invention or a genuine local tribal goddess.

Now to look at Fastelavn!

__________
* I reviewed this book back in 2013, here.
** Note that this is an Anglicization; the name is more properly either hreda or hreða (see below).
*** This is a different arrangement than the later Icelandic calendar devised in 955 by Þorsteinn the Black, which has set a set duration for each month.