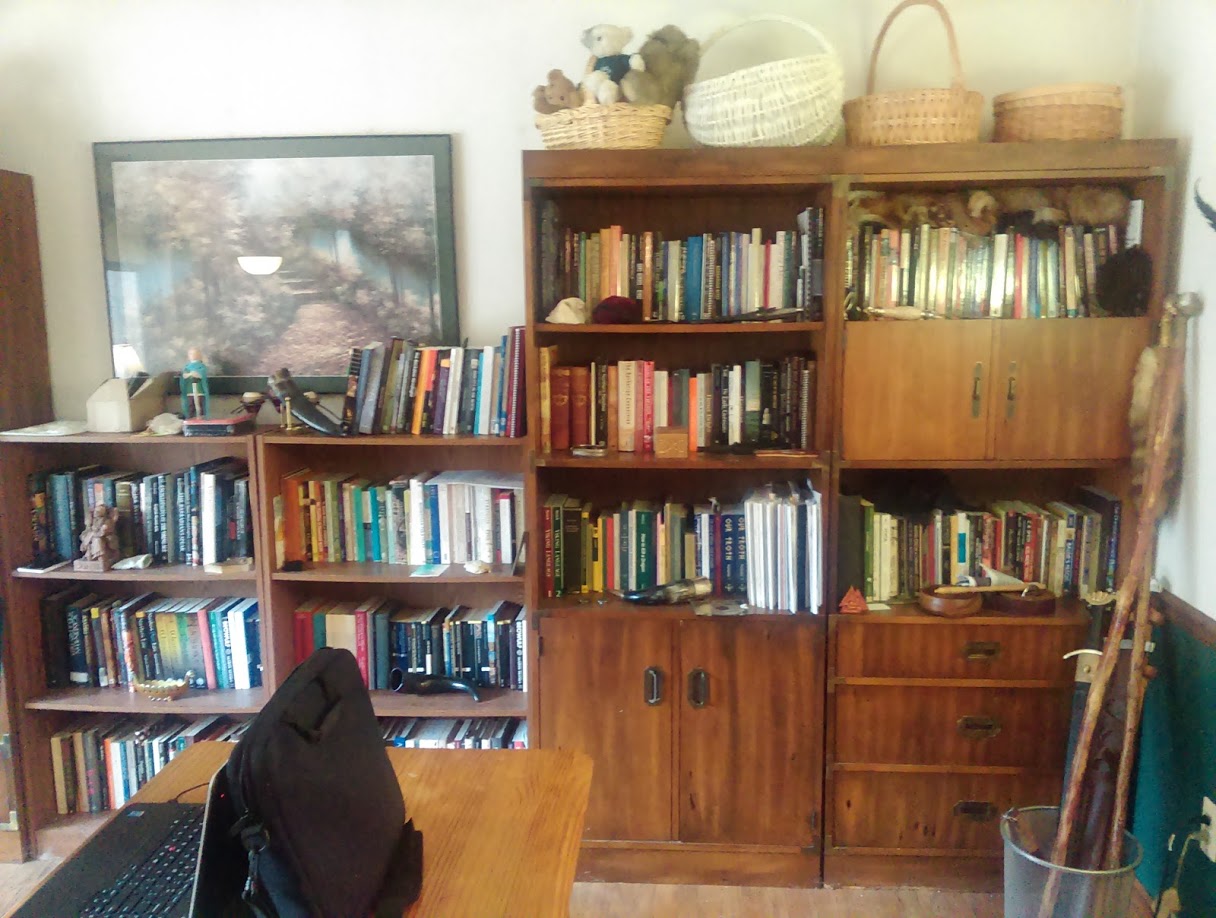 Time to put that library of mine to work! A friend and tribe-mate of mine recently asked, in my capacity as goði, to recommend some resources, as she would like to start studying Heathenry again. She’s got a good grasp of the basics in my opinion, but she specifically asked me to treat her like a newcomer, so this is what I’ve come up with. I’m sharing it here, as I think others might find this sort of thing useful as well. Everything listed below is going to be in English; if you’re fortunate enough to know Old Norse, Anglo-Saxon, or modern Icelandic, you’ll have a leg up on those of us who aren’t fluent in those languages.

This is just a first pass at the fundamentals, and only scratches the surface of what’s available. More to come for more advanced and specialized information.

A good grounding in the mythology of the folk is essential. My suggestion for those starting out is to begin with a modern, readable, retelling, and then go back and read the originals. You’re much more likely to retain and understand what you’re reading, if you’re broadly familiar with the story and characters to begin with.

The Norse Myths by Kevin Crossley-Holland. An excellent modern retelling of the myths. He doesn’t take too many liberties, and will leave the student with a solid understanding which will serve them well as they tackle the originals. Available in hard copy. A far inferior retelling from 1859 by George Dasent is available for free online.

The Prose Edda by Snorri Sturluson. This is one of the foundational works that describe the mythology and our gods, and most of what is known as “the Norse myths” comes from this work. It was written a few hundred years after the conversion of Iceland to Christianity, but suffers from an attempt to systematize and rationalize the material, and an occasional misunderstanding by Snorri of what he was recording. Still, it’s essential, and you want to try to find a translation that includes the whole thing; most versions today omit certain sections. Available in hard copy or free online.

The Poetic Edda. Finding a decent translation can be a trial, but there are some out there. Generally speaking, the more modern the translation the more accurate, but you’ll also find a bunch of 19th century translations on the web for free. Be aware that almost all translations shuffle around some of the strophes to make them make more sense, which along with variations in the various original manuscripts, accounts for many of the discrepancies you might notice if you compare versions. Available in hard copy (Larrington has an excellent translation) or free online (not so great a translation, but has the advantage of being free; there are others out there, too).

History of the Danes by Saxo Grammaticus. Originally written in Latin, the first nine books of this work are generally viewed as being myths that have been euheremized (i.e., they treat the gods as if they were regular mortals). There are some great variations of the “regular” myths, including a completely different account of the death of Balder. Keep reading the rest of the work if you want to venture into more historical accounts. Available in hard copy (I like the Ellis-Davidson translation, even though she only covers the first nine books) or free online.

The Nibelungunleid. A continental German version of the story of Sigurd the dragon-slayer. While it is also found in the later poems of the Poetic Edda, it is not only useful to compare variations, but is also enjoyable in itself. Available in hard copy or free online.

As an historian by training, it’s easy to go crazy suggesting a ton of modern books on the history of the Migration Era and the Viking Age. I have disciplined myself to only choose two of the most readable. I’m also including a few other primary works, which give a wonderful view of a fully-formed Heathen society at its height, through its conversion to Christianity.

The Early Germans by Malcolm Todd. A great survey of the Germanic tribes during the Migration Era, who caused the end of the western Roman Empire. Available in hard copy (used).

The Vikings: A History by Robert Ferguson. There are literally dozens of surveys of Viking-era history, but this is a particularly readable and comprehensive one. Available in hard copy.

The Sagas of Icelanders. Rather than list out a bunch of individual sagas, I’m going to point to this excellent collection. It’s not every saga, but it’s all the major ones and a good number of minor ones, and the translations are first-rate. Available in hard copy, but you can find a number of individual sagas online for free, but they’re mostly 19th century translations.

Heimskringla by Snorri Sturluson. A collection of many different sagas of Norwegian kings, the first (Ynglingasaga) could legitimately be listed under the mythology section for the same reason that Saxo’s work is; it describes a number of mythological events and beings as if they were mortal. Available in hard copy or free online.

Why have separate sections on mythology and religion? The former is the mythological base, while the latter is the practical application.

Asatru: A Native European Spirituality by Stephen McNallen. This provides the philosophical foundation for modern Asatru, answering the question, “why be Asatru?” Also see my review for a lot more commentary. Available in hard copy.

A Book of Troth by Edred Thorsson. A re-edition of the classic work from 1989, you can read my review for details. Where McNallen’s book answers the question “why?”, this book gives the “how?” (although it is a little dated, it’s still very valuable). Available in hard copy.

The Lost Beliefs of Northern Europe by H.R. Ellis-Davidson. I recommend anything by H.R. Ellis-Davidson, but unfortunately many of her books are out of print. The good news is they can often be found in used bookstores very reasonably.  This is one of the best. Available in hard copy (used).

I firmly believe that folklore from Scandinavia, Germany, England, and Iceland is key to understanding the various wights of the land and home, which formed the basis of the everyday religion of our ancestors. They’ve been Christianized in many cases, but they are still invaluable in trying to recreate the beliefs and practices of our folk from pre-Christian days.

Scandinavian Folk-Lore by William Craigie. One of the better collections of folklore from the 19th century, when it was all the rage. Available in hard copy or free online.

Scandinavian Folk Belief and Legend by Reimund Kvideland. A more modern version, available in most large bookstores, and a great introduction. Available in hard copy.

Some books aren’t meant to be read straight through, but are still recommended to supplement your studies.

Dictionary of Northern Mythology by Rudolf Simek. Terrific book with concise but informative entries on a variety of different subjects. Available in hard copy.