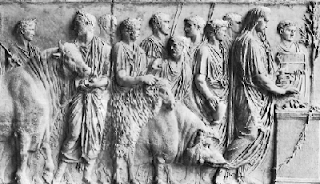 In Estonia, all animal slaughter must take place in a government-approved slaughterhouse. That effectively ends all private animal slaughtering, and once again is a measure aimed at kashrut and halal practices.

Back in June, the lower house of the Dutch parliament approved a similar ban. Luxembourg, Norway, Sweden, and Switzerland already ban ritual slaughter. In the United States, the Supreme Court has ruled that ritual animal sacrifice is protected under the First Amendment, although that hasn’t stopped states and local jurisdictions from attempting to do so (unsuccessfully, heretofore).

The unintentional fallout of laws like this is that they can also affect smaller religions that sometimes practice animal sacrifice, such as Paganism and Heathenry, as well as other faiths such as some forms of Hinduism and Sikhism, Santería, and others.

Not all Pagans and Heathens practice animal sacrifice, of course; in fact, many are strictly opposed to it on moral grounds. But many Heathens and some Pagans, especially those who are of a more reconstructionist bent such as Ásatrú, Théodism, the Religio Romana, etc. do practice and/or support it (again, not all, but many), and they are seeing their own rights trampled as the law attempts to legislate more “humane” treatment of animals. I myself have been present at a svínblót (pig-sacrifice) and it was one of the most stirring and spiritual events I have ever witnessed.

When done in such a setting, an animal sacrifice is most definitely neither terrifying or inhumane for the animal involved. Indeed, care and love are heaped upon the animal; if it shows fear and terror as it is led up to the spot where it is to be given to the Gods, that is a sign that the sacrifice should not take place. It is often bathed and garlanded, pampered and given affection and honor that it would never have received in an industrial slaughterhouse. The killing itself is invariably as quick and painless as possible, again in keeping with the general principle that a frightened offering is a failed offering. When done properly, the animal simply drops with nary a whimper, content to bring the words of those assembled to the ears of the Gods, happy that its last hours were gentle and pleasant, and the meat then shared among those assembled to witness the act.

The mere fact that in such a slaughterhouse the animals are stunned (either by a 300-volt shock to the back of the head or by a hit from a powered hammer right between the eyes– quite “humane”) prior to being killed does not make their final moments any less uncomfortable or terrifying. In fact, I would argue that an animal who is given to the Gods in such a fashion dies a cleaner, less stressful, and less painful death than it would have suffered in an industrial slaughterhouse, crammed in with hundreds of other animals, mutually terrified and treated like… meat.

In this sense, these efforts by animal rights activists to make animal slaughter more humane are misguided, inasmuch as they inadvertently sweep individual sacrifices up into their net alongside industrial practices. Not only is it a violation of the religious liberty of those who choose to honor the Gods in this particular way, but it arguably the case that such individual sacrifices (conducted by those with the training to do so) are much more humane even than a “humane” industrial slaughterhouse.

This is not, of course, to imply in any way that those who do not wish to engage in animal sacrifice do so. But while no one should be coerced into participating in or observing a ritual against their wishes, the door of coercion swings both ways, and those who do choose to make offerings should have the right to engage in the practice, as long as it is done humanely and respectfully.