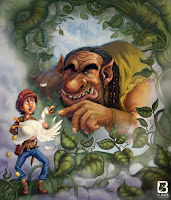 From the BBC comes a terrific report on an article recently published by the Royal Society on the very ancient origins of some fairy tales that were thought to be early modern inventions:

Using techniques normally employed by biologists, academics studied links between stories from around the world and found some had prehistoric roots.

They found some tales were older than the earliest literary records, with one dating back to the Bronze Age.

The stories had been thought to date back to the 16th and 17th Centuries.

Durham University anthropologist Dr Jamie Tehrani, said Jack and the Beanstalk was rooted in a group of stories classified as The Boy Who Stole Ogre’s Treasure, and could be traced back to when Eastern and Western Indo-European languages split more than 5,000 years ago.

Analysis showed Beauty And The Beast and Rumpelstiltskin to be about 4,000 years old.

And a folk tale called The Smith And The Devil, about a blacksmith selling his soul in a pact with the Devil in order to gain supernatural abilities, was estimated to go back 6,000 years to the Bronze Age.

(Much more at the link)

Tehrani and Sara Graça da Silva of the New University of Lisbon in Portugal studied 275 magic-based stories from a database of more than 2,000 types of folktales. Magic stories include beings or objects with supernatural powers and are the largest folktale group. Statistical analyses of the relationship between the folktales and language, as well as between the folktales and how they may have been shared by neighboring peoples, left the team with 76 stories that they thought were strong candidates for accurately estimating folktale age. Family trees, or phylogenies, of Indo-European languages throughout Asia and Europe helped the researchers investigate how the region’s language history related to these folktales.

(Again, much more at the original link)

The paper itself can be downloaded for free from the website of the Royal Society. Compared to the absolutely disappointing train-wreck that “Breaking the Mother Goose Code” was last year, seeing some solid scholarship on this subject is a welcome change. 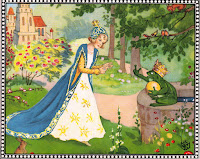 This sort of thing is of great importance to reconstructionist Heathens, as it gives us a chance to delve into the sorts of everyday folktales that might have been current at the same time our great written sources were being set down for the first time, and thus give us insight into the day-to-day beliefs of the people who were practicing pagans. In short, while the stories of the Poetic Edda were being sung by skalds in the halls of lords, these fairy stories were being told by mothers to children on humble farmsteads. And that homey, everyday-religion aspect of Heathenry is something that we desperately need to reconnect with.