I am writing in response to your letter to the Editor of the Colorado Springs Gazette, dated February 13, 2010, entitled “Respect Founding Principles”. I must say that your choice of title was quite ironic, as it is very apparent that you yourself have no respect for the founding principle of freedom of belief. For example, when you state,

I am sad that the entire Academy is being conditioned to respect paganism, and that anything Christian is becoming a hate crime.

You are doing a grave injustice to the Establishment Clause of the First Amendment of the U.S. Constitution, which does not single out Christianity as having any sort of favored status in this nation, but merely gives protection to “religion”:

Congress shall make no law respecting an establishment of religion, or prohibiting the free exercise thereof;

That very deliberate choice must, despite your personal opinion of non-Christian faiths, include all religion. Respect for Hinduism, or Buddhism, or Islam, or Judaism, or, yes, even Paganism is a cornerstone of our nation’s concepts of the rights of the individual. First and foremost is the right of every individual to choose his or her own religion, or lack thereof. And the government, particularly in a coercive environment such as a military academy, is duty-bound to respect each and every one of those choices.

When you make reference to “anything Christian is becoming a hate crime” you are being quite disingenuous. The Air Force Academy maintains several facilities for Christian worship, all of them much more grandiose than the simple circle of stones that has so inconvenienced your world-view that, Christianity being the only “true” religion, the government must therefore impose your own personal prejudice by force of law.

You display a shocking double-standard when you make statements such as,

If “Congress shall make no law respecting an establishment of religion,” what authority did Air Force Superintendent Gould have to order Air Force chaplains, engineers and heavy equipment operators to help build the pagan worship site? Superintendent Gould could have allowed the pagans to have their worship ceremonies at the site, but he had no constitutional authority to order anyone of any other faith to move one pound of dirt or one stone.

That is, in fact, a possibly valid interpretation of the Establishment Clause. However, the Air Force Academy also has spent millions of taxpayer dollars building and maintaining no less than three separate chapels for Protestant, Catholic, and Jewish cadets. Having thus set the precedent that some faiths are supported, the Supreme Court has maintained consistently that all faiths must thus be supported. I daresay moving a few rocks cost the taxpayers quite a few million dollars less than the construction of three entire chapels. Certainly the pagans have not yet demanded the installation of a pipe organ, let alone two, as other faiths have.

Yet you don’t seem to have a problem with that use of taxpayer money. You cannot have it both ways, Ms. Lucas; either it’s wrong to fund them all, or it’s right to fund them all. 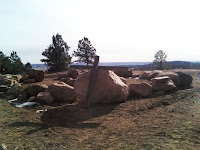 Your double-standard continues when you state,

If the worship site is on federal property and does not belong to the pagans who are using federal property to worship on, why is it any more a hate crime to place a cross on those rocks than it would be for some overly zealous pagan worshipper [sic] to place a rock in the Air Force Chapel in front of the cross?

Placing a rock in the Air Force Chapel is not a fair comparison; would you think it a hate crime to paint a pentagram on the chapel door? Or place a statue of Zeus on one of the altars? Or paint a swastika on the Aron Kodesh of the Jewish chapel? After all, if they’re on Federal property, they don’t belong to the Christians or the Jews, right?

You seem to have a mind-set that claims the First Amendment as an exclusive franchise for your own religion. Fortunately, the legal tradition of this nation runs counter to your prejudices and bigotry.

The First Amendment protects all religion, not just yours. That’s why it was right for the Academy to create the worship space in the first place, and why it was a hate crime for that space to be vandalized by over-zealous Christians.

We must respect each others right to choose, even though we might disagree with that choice. Once folks like you stop trying to impose their choices on other people, this nation will be a freer place.

4 thoughts on “An Open Letter to Anna Lucas of Peyton, CO”