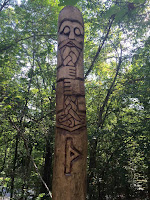 The following comes from the Risala of Ibn Fadlan, a Muslim traveler who wrote of his adventures north of the Black Sea in the 10th century CE. Here, he is speaking of the Rus, a group of Norsemen who came from Sweden down the various rivers of western Russia as traders and eventually settlers, and who gave the land its name.

The moment their ships arrive at this wharf, every one of them disembarks, taking with him bread, meat, onions, milk, and nabidh [alcoholic beverage], until he arrives at a long wooden post fixed in the ground which has a face resembling that of a man. Around it are small figures, behind which are long stakes fixed in the ground. He approaches the large figure, prostrates himself before it and says: “O lord, I have come from a far land. With me there are such and such a number of slave girls and such and such a number of sable skins,” until he has enumerated all the articles of commerce that he has. He then says: “And I am come to you with this offering.” And he leaves what he has with him in front of the wooden post. [He then adds]: “I wish you to provide me with a merchant possessing many dinars and dirhams [Arabic coins], one that will buy from me all that I desire, and who will not disagree with what I say.” He then departs.

If sale [of the merchandise] proves to be difficult, and the days of his sojourn are prolonged, he returns with a second and third offering. If [after this] what he wants proves to be difficult of attainment, he carries a gift to each one of the small figures and asks for their intercession, saying: “These are the wives of our lord, his daughters and his sons.” He continues to appeal to one figure after another, imploring their intercession and humbling himself before them. Perhaps the sale of his merchandise is facilitated and he sells it. He then says: “My lord has answered my need, and I must repay him.” He then takes a number of sheep or cattle and slaughters them, giving away a portion of the meat as alms, and carrying the remainder and placing it in front of the large wooden figure as well as in front of the small ones around it. He hangs the heads of the cattle or the sheep on the wooden stakes fixed in the ground. When night sets in, dogs come and eat everything. He who has made the offering says: “My lord is pleased with me and has eaten my gift.”

Now, as in all things, one needs to bear in mind the prejudices and predilections of the observer, but this first-hand account of a Norse sacrificial offering is fascinating in a number of details. 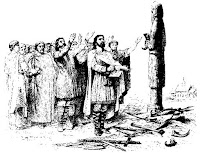 It should be noted that this is a description of an as-needed offering, rather than one of the fixed holiday celebrations at which sacrifices were made. But the wealth of details, and their implications, are a wonderful source to consider when we modern Asatruar are developing our own ritual praxis.