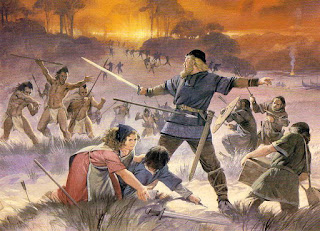 There’s a story kicking around since 2010 about some results of a DNA survey of Icelanders that purports to show an Amerindian came to Iceland around the year 1000 CE (presumably with some Norse explorers) and interbred. “AH-HA!” the Usual Suspects cry – proof positive that our ancestors didn’t care about “racial purity”.

Rather than just taking such people at their word, it’s worth reading the actual article, and the report upon which it is based. As can be imagined, it’s not quite the slam-dunk that folks who tout the article seem to think it is.

What’s most often cited is the National Geographic article reporting on the study. The language used is incredibly wishy-washy, and goes out of its way to hedge on any sort of definitive conclusions:

“The study authors themselves admit the case is far from closed.”

“Despite the evidence, for now it’s nearly impossible to prove a direct, thousand-year-old genetic link between Native Americans and Icelanders. For starters, no living Native American group carries the exact genetic variation found in the Icelandic families.”

“It’s possible, he added, that the DNA variation actually came from mainland Europe, which had infrequent contact with Iceland in the centuries preceding 1700.”

“Complicating matters, the historical record contains no evidence that Icelandic Vikings might have taken a Native American woman back home to their European island, scholars say. “It makes no sense to me,” said archaeologist and historian Hans Gulløv of the Greenland Research Centre in Copenhagen.”

Not exactly a rousing endorsement of the theory. Just a lot of assumptions and wishful thinking. But some people are willfully ignoring those caveats and running with a very dodgy conclusion because it suits their preconceptions and political narrative.

There’s also the question of the dating of the DNA admixture. According to the article, the DNA evidence points to an earliest date of around 1700 CE:

Through genealogical research, the study team concluded that the Icelanders who carry the Native American variation are all from four specific lineages, descended from four women born in the early 1700s.

The genealogical records for the four lineages are incomplete before about 1700, but history and genetics suggest the Native American DNA arrived on the European island centuries before then, study co-author Helgason said.

He pointed out that Iceland was very isolated from the outside world in the centuries leading up to 1700, so it’s unlikely that a Native American got to the island during that period.

As further evidence, he noted that—though the Icelanders share a distinct version of the variation—at least one lineage’s variation has mutated in a way that would likely have taken centuries to occur, the researchers say.

So the actual DNA evidence points to a date of 1700 CE. But because Iceland was “very isolated” at that time, the researches push back the date seven hundred years for no real reason. Iceland was pretty isolated in the year 1000, too; voyages between Iceland and North America were so extraordinary that entire sagas were written about them. Meticulous records were kept concerning who married whom, and who was descended from whom. But the researchers for some reason feel that a secret, unrecorded Viking-era voyage to Vinland that brought back a skraeling wife was less of a stretch than the idea that an Amerindian could have made their way to Iceland in the age of sailing ships. Why is the one more credible than the other? It’s not, of course. 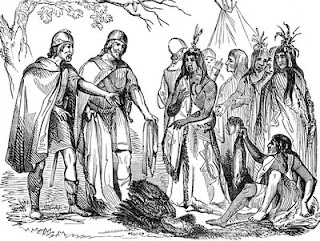 As for the variation to the DNA that’s noted above, there’s absolutely nothing to say whether the mutation happened before or after the Amerindian blood (if that’s even what it is) entered the Icelandic gene pool. It’s precisely as likely that the variation occurred within a now-extinct Amerindian population (say, for example, the Beothuk, who went extinct in 1829) and was carried to Iceland by way of Denmark (which had a trade monopoly with the island) in the late 17th century.

If Pocahontas could be brought to London a hundred years earlier, there’s certainly nothing to say that a Beothuk woman couldn’t be brought to Copenhagen, and then maybe made her way to Iceland (trying to get home?) around the start of the 18th century.

So when someone gets all breathless and tells you that DNA proves that the Norse interbred with Amerindians in the year 1000, calm them down and explain:

Facts is facts, after all. And the conclusions a lot of people are drawing don’t seem to line up with the facts. Certainly they’re not the only interpretations, and not the only conclusions, that can be drawn. The original study itself even says so.

One thought on “About that Skraeling DNA in Iceland…”