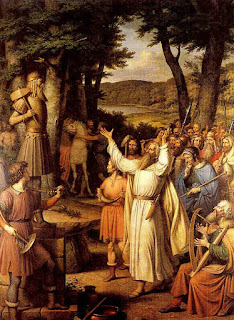 If I may be permitted a brief interlude in my series on Yule and pre-Yule subjects, I’ve noted that Asatru tends to have a lot fewer holidays than other Indo-European religions. And here I am talking about well-attested historical celebrations, not modern inventions that (for instance) honor heroes such as a Day of Remembrance for Ragnar Lothbrok, or convert modern holidays into deity-specific holidays through dubious folk etymology such as celebrating Vali’s Day or Einherjar Day in lieu of Valentine’s or Veterans’ Day.

Historically, we really know only of a few holidays that are described even briefly; Winternights, Yule/Midwinter, Sumarmal/Sigrblót/Ostara, Disablót, Alfablót, and Thorrablót. From the Anglo-Saxon, we can add Charming of the Plow and Mother’s Night. Maybe one or two more. But even these are but sparsely described. and leaves us with only eight celebrations on the calendar, and a total of 20 days if we are generous and give all of the blóts three days spans.

Contrast this with some other Indo-European religions. Hindus have scores of holidays holidays, the Athenians had over 60 holidays of varying duration, and the Romans had dozens more than that, if one counts the various ludi (games) on the calendar, again some lasting many days. So why do the Germans get stuck with a measly 8? Bear in mind that we’re talking about largely agrarian cultures without the concept of weekends off; these sorts of holidays would be vital. 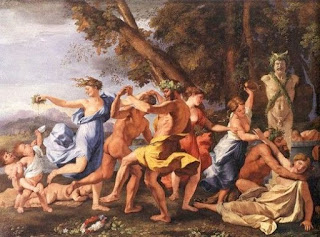 I submit that the Germans had just as many holidays as their southern and eastern neighbors; we simply haven’t identified them yet. My research on these Yule and pre-Yule celebrations has pointed me strongly in this direction. What we’re seeing, for instance, with the subject of yesterday’s post – a celebration involving a celebration of the story of Thor’s goats, possibly with animal guising and faux child-napping – isn’t “part of Yule”, but rather was simply another holiday, which didn’t get mentioned in direct attestations, but which survived through having its outward features adopted by the church, and surviving in mutated fashion through to the current day. We moderns have lumped all these sorts of things together in our zeal to categorize and reduce complexity, not to mention the modern secular and commercial effort to make the start of the Christmas season ever-earlier. When you look at some of the 19th century folklorists’ accounts of rural life and peasant and folk customs in England, Scandinavia, and Germany, the year is positively crowded with celebrations and customs. 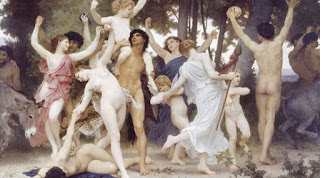 If this is true, then we could have an inkling at a living year of holidays and celebrations undreamed-of (with several of these sort of folk-holidays each month), as well as a possibly methodology to suss out some details (looking for Christian saint’s day or other holy day celebrations with incongruous elements that are unique to northern Europe). This would yield something closer to the medieval European folk-calendar, which the church deliberately designed to emulate the old Heathen cycle of celebrations, in order to supplant it, or the old pre-Christian Roman calendar.

Of course, not everything that “seems” pre-Christian is indeed pre-Christian, and care has to be taken to separate the wheat from the chaff. I doubt that the full extent of these celebrations will ever truly be recovered, but I think it’s at least worth investigating beyond the December/January examples I’m laying out here.